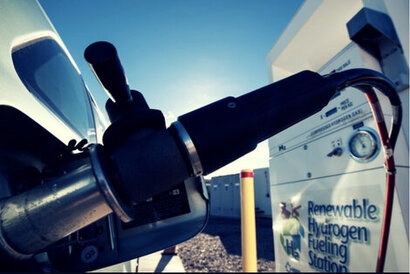 Under the first phase of the two-phase programme, the consortium is delivering a feasibility study for a Phase 2 prototype which, if successful, will be built between 2022 and 2024 at Holyhead in North Wales.

There is a need for new technologies that can provide grid flexibility by utilising excess electricity generation. This otherwise curtailed electricity, can be cheaply converted into hydrogen, which is zero carbon fuel and better suited than batteries to the needs of heavier vehicles like buses and HGVs. While refuelling with hydrogen is simple, getting the hydrogen to the service stations is proving to be a problem and this project is addressing that.

Transporting hydrogen from hubs where it is produced, to service stations where it is used, involves movements through urban areas, so safety is very important. Consequently, the UK’s COMAH regulations for dangerous goods prohibit the storage of hydrogen gas in large volumes in non-industrial areas like truck stops.

“This limitation on volume practically limits the number of trucks that a truck stop can service to around eight to 10 HGVs per day” said Brendan Bilton, Founder and Chief Technology Officer at hydrogen refuelling specialists, Element 2. “With around 500,000 HGVs on UK roads, compressed hydrogen simply doesn’t offer the scalability as a ‘Hub to Station' hydrogen carrier. We are excited to be part of this project because Hydrilyte has the potential to provide a safe and scalable alternative that will enable the UK to lead the world in the transition from diesel to hydrogen powered heavy vehicles by 2030.”

Willie Reilly, Alliance Director at Worley, added that Worley’s advisory and project execution team is partnering with Carbon280 globally because of the potential for the Hydrilyte technology to provide a safe, low cost, highly scalable, multi-purpose hydrogen carrier, not only for Hub to Station transport, but across the many industries that the company operates in.