Wednesday, 17 November 2021
0
Robin Whitlock
British synthetic fuel company Zero Petroleum has announced the successful completion with its partner the Royal Air Force of the first flight in the world to be powered entirely by synthetic aviation fuel. 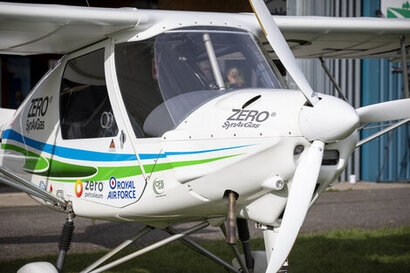 On the morning of 2nd November 2021 at Cotswold Airport, an Ikarus C42 aircraft conducted the flight which has since been awarded “First aircraft powered by synthetic fuel” from Guinness World Records. The flight is the first step in a joint programme which aims ultimately to defossilise the entire fuel requirement of the RAF.

Zero Petroleum’s synthetic fuel is manufactured by extracting hydrogen from water, using energy generated from renewable sources; and combining the hydrogen with carbon dioxide, captured from the atmosphere, to create “drop-in” fuels which entirely substitute current fossil-based aviation fuels. The process uses Direct FT, an advanced proprietary variant of Fischer-Tropsch technology which, as a fully industrial process, is reliable, secure and fully scalable without the land-use and biodiversity challenges of biofuels.

“Climate change is a transnational challenge which threatens global resilience and our shared security and prosperity” said Air Chief Marshal Sir Mike Wigston KCB CBE ADC Chief of the Air Staff. “I am determined to tackle this head on and have set the Royal Air Force the ambitious goal to be Net Zero by 2040. The way we power our aircraft will be a big part of achieving that goal, and this exciting project to make aviation fuel from air and water shows how it might be done. I am delighted at the award of this world record and to see the Royal Air Force yet again at the leading edge of innovation and technology, as we have been throughout our history.”

Zero Petroleum was founded by Formula One engineering legend Paddy Lowe and Professor Nilay Shah OBE, Head of Chemical Engineering at Imperial College London. Paddy was previously Technical Director at McLaren, Executive Director at Mercedes and Chief Technical Officer at Williams, contributing to a total of 158 race wins and 12 World Championships, and recognised by Honorary Fellowship of Sidney Sussex College, Cambridge. Nilay is one of the most prominent and influential chemical engineering authorities in the world and last year received an OBE for services to the decarbonisation of the UK economy. Both Paddy and Nilay are Fellows of the Royal Academy of Engineering.

The company’s vision is to become the world leader in synthetic fuels technology and production. These innovative fuels can replace fossil fuels without the need to adapt distribution infrastructure or engine design. They are crucial for sectors in which electrification is not currently an option, including aviation, agriculture and a wide range of high-performance vehicles.

The project to complete this flight, named Project MARTIN, started in June 2021. Zero Petroleum and its technology partner IGTL Technology combined efforts to design and build a production plant in record time in Peterhead, UK. The plant was then positioned at Billia Croo, Orkney, UK for fuel manufacturing operations during September and October 2021.

“This unique project with the Royal Air Force demonstrates the validity of our synthetic fuel and the potential it has to eliminate fossil CO2 emissions from a number of difficult but critical sectors, including transport which currently accounts for 23 percent of the global total” added Zero Petroleum founder Paddy Lowe. “We are particularly proud of the fact that this high-grade aviation gasoline ZERO SynAvGas was developed in just five months and ran successfully in the aircraft as a whole-blend without any modification whatsoever to the aircraft or the engine. The engine manufacturer Rotax’s measurements and the test pilot’s observations showed no difference in power or general performance compared to standard fossil fuel. Synthetic fuel allows the world to rethink its relationship with petroleum which can now be man-made in significant volumes within a carbon neutral process. This revolution will power the Energy Transition by creating a fully circular fuel supply, at scale. This is the start of a new era of perpetual energy, fossil-free. I want to thank the Royal Air Force for setting and supporting this challenge and to thank the incredible team at Zero Petroleum and at our technology partner IGTL Technology who delivered the fuel for the flight today. I could not be more excited as I believe we have together made a significant mark in the history of powered aviation which started with the Wright brothers just 118 years ago.”