The future of offshore wind support?  An interview with John Gordon Davies of CDC Scotland Ltd 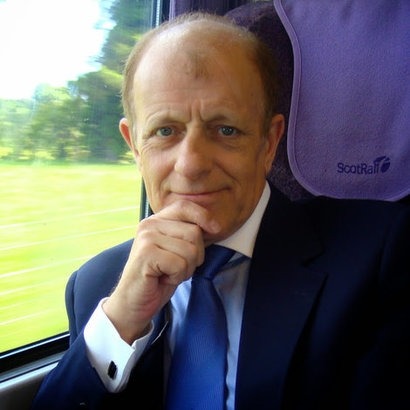 CDC Scotland Ltd is a company that has long believed that safety and productivity in offshore wind can be improved.  The company is about to make the industry a lot safer and cost effective with two new vessels coming to market – the Heron and the Chameleon.

REM talked to John Gordon Davies of CDC Scotland to find out more about them.

Tell me about CDC and what it does

CDC Scotland Limited have developed designs for two new revolutionary support vessels for offshore operations which will prove to be of enormous benefit to the construction, servicing and maintenance sectors of the offshore industry.

Originally the company was a partnership set up while working in the UAE.  The early concept for one of the vessels led to a firm commitment, however before we were due to fly in to London to sign the $100 million deal, the 2008 financial crash happened and the investment offer evaporated.

As a result we ice-boxed the project, revisiting it in 2010.  Fresh research to update ourselves on market conditions saw the offshore wind industry the hot news.  In May 2011 we filed patents on the CDC Heron vessel, so called because the bird’s flight resembles structural elements of the vessel.  Patents are now granted in a number of jurisdictions.  The Heron is a double decked, lighter version of a conventional drilling jack-up and within its design capability is able to do all well interventions bar the actual drilling.  Returning from the UAE, we registered the company in Glasgow as CDC Scotland Ltd in 2012.

Just over a year ago, Ian Brown joined us, a veteran from BP with 35 years’ service as Senior Wells Manager.  He knew about our project and bought shares, because as a drilling man he sees huge potential for our vessels in the Oil & Gas (O&G) sector as well as the wind industry.

I presume your experience in the energy industry therefore is primarily from O&G?

Absolutely yes, we have been involved from maintaining, operating, building, converting, refurbishing, to commissioning advanced rigs in shipyards around the world.  This includes nine years in two shipyards in China.  Between the partners, we have worked on every type of drilling rig, from land rigs to jack-ups, semi-submersibles to drillships.  The thing is, apart from the turbine on top of a wind tower, there is not a lot of difference between offshore wind and offshore O&G – you’ve still got the same hostile marine environment.  That’s where we believe the wind industry has the capacity to learn from its counterpart.

What is the major problem with the offshore wind sector at present as you see it?

As an observer, the main challenges I see, are access and safety with the ability to perform maintenance efficiently.  At the moment, near- and mid-shore, ‘bump & jump’ vessels (carrying circa 12 technicians) are extensively used for servicing not maintenance.  As the vessel approaches a turbine, and ‘engages with it’ technicians have to step from the boats on to a ladder and climb up to the landing platform to access the door into the tower.  As you can imagine, these guys have to time their jumps on to the ladder very well…….  There is a new range of vessels now being deployed, fitted with heave compensated, telescopic gangways.  These larger vessels accommodate more men and can drop off at various turbines but while providing improvements in safety, and delivery of personnel, are still only providing servicing activities.  Servicing is not Maintenance. 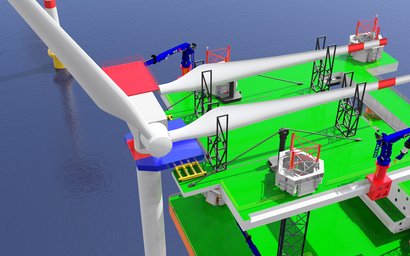 Talking about the far-shore distances sees technicians spending more time travelling than working.  Even on a mid-shore farm, say 15-20 miles from the base port could involve 30 plus miles including travel between towers.

Having spent a lot of time offshore and in exposed areas, I’ve experienced weather changing extremely quickly, even wave heights of up to 90 feet!  Technicians on a CDC Heron wouldn’t view weather conditions as irrelevant, the sea can be wild but the technicians can still operate on a flat, stable walk-to-work platform at turbine height, and if the weather abates, daughter craft can also be launched so a range of servicing activities can be undertaken efficiently, and safely on more than one turbine.

So that’s the transport aspect, what about the whole area of servicing and maintenance?

A recognised problem for these assets is associated with the bump & jump servicing, where anything bigger than hand-held items necessary to resolve a turbine breakdown, has until recently required the return of an expensive construction jack-up.

The recent deployment of Wind Turbine Service Vessels, with motion compensated gangways and cranes, allow larger payloads to be delivered to the turbine landing platforms but this still limits the activities to servicing and light repairs.  Where bearings, gearboxes, nacelles and blades weighing tens of tons are involved the only realistic way to deal with them is using a crane.  With cranes you have the same problem experienced in other offshore operating sectors, above certain wind speeds, they cannot be operated.  This being a principle reason why current jack-ups performing construction or maintenance, typically only operate seasonally and not year round.

What kind of costs could these problems incur on the industry?

Actual costs, are impossible to quantify, as each wind farm, and each location are different, although we’ve tried to find out.  The construction units are not cheap to charter, travelling at speed to maximise productive technician time uses volumes of fuel.  It’s not only expensive but detracts from the green ethos that offshore wind is supposed to espouse.  Other wind industry support vessels, some based on modified ships, super yachts, RoRo ferries, each has its own problems already touched upon.

If there are turbine breakdowns, the support vessels are limited to the equipment they can transfer.  At what point does an operator decide to bring in a large heavy jack-up vessel – when one turbine is out of commission? Three? 10? These are the commercial dilemmas facing the industry today.

Tell me about the CDC Heron and how it can help the offshore wind sector advance and improve?

The Heron addresses the problems of accessing the top of turbine towers in an array for maintenance.  It’s about getting people up to the work area and providing a safe work environment.  Hence the second deck, a section of which can be cantilevered out towards the turbine.  At sea, these turbines sway in the wind, as do the jack-up support vessels.  To counter these differential relative motions, we designed a device which encircles the tower and inflates a soft collar to capture the tower.  It’s what we call a ‘soft capture’ because it’s not metal on metal.  This synchronises the motions of the tower and the Heron jack-up.  People can access the turbine inside and out.  Rope access by abseiling technicians can be dispensed with!  Each technician can have a pair of feet securely on the deck.

To inspect and repair the blades, the turbine nacelle can be slewed side on to the Heron and using the turning gear, rotate the hub to place the blade across the deck, allowing it to be inspected lying horizontally.  If repairs are needed, and they will happen often as the salt in the sea water acts like a sandblaster, these can be done in environmentally-controlled conditions down on deck and include complete industrial MRI scanning of whole blades to expose hidden cracks, etc. 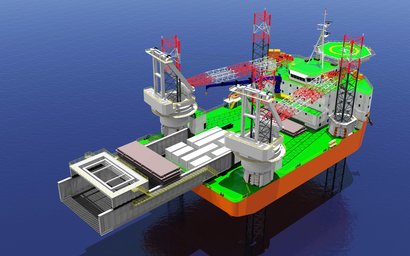 What is the difference between the Heron and Chameleon?

The difference between the Chameleon and the Heron is that the Chameleon doesn’t have the second elevating deck, and primarily, is geared more towards the O&G industry.  However, because it can have two 250-ton cranes on it, it can be used for some of the elements required of the wind industry.

I get the feeling there is a lot more room on these vessels for fully-equipped workshops and accommodation and so on.

Correct.  The Heron and the Chameleon can accommodate up to 150 people depending on which part of the world it is operating [varying standards and rules].  Heron and Chameleon, each can have additional modular accommodation added, increasing bed spaces.  The Heron does have a lot more deck space, 3,000 m2 crane coverage over the total area by either knuckle boom cranes or gantry cranes.  The design is of modular construction to allow rapid redeployment with different kit from a home port.  On the front of the vessel there is a CAP47 compliant helideck.

What would be the propulsion system for these vessels?

Our vessels operate dual-fuel engines with diesel and/or LNG making them a lot cleaner than diesel.  The principle purpose of the generators is for powering the propulsion and jacking systems of the vessel and provides power for any special purpose equipment on deck.  Power for many of the domestic and hotel services can be provided using small, vertical axis wind turbines on the top of each leg.

What stage of development are the CDC vessels at now and when could we expect to see them being deployed?

In April this year, CDC’s Ian Brown, delivered a member presentation to the Royal Institution of Naval Architects in London with a similar subsequent engagement in Singapore, each created a significant increase in interest from organisations requesting NDAs and further information.  Interest is coming from London, Vietnam, to Singapore and China.  We have the support of Braemar ACM, the second largest shipping brokers in the World.

The work we’ve already done has put us well on the way to completing the basic design package with our naval architects in Dubai, Great Waters Maritime, which is the final step before moving towards building.  Every ship of a certain size has to be classified and we have obtained approval in principle from the American Bureau of Shipping (ABS).  The next stage will be completing the basic and detailed design elements some of which can take place almost alongside construction.  Three months after detailed design we would be cutting steel, and delivery of first vessel would take about 24 months to complete without any need for prototyping.  Thereafter subsequent vessels of the same or similar design, could be delivered in the region of 16 to 18 months from order.

When you have been within days of signing a $100 million deal ahead of the worst financial crisis in living memory it’s difficult to pick yourselves up; but it has made the team absolutely convinced of the value of the vessels to the offshore sectors, and more determined than ever to see them deliver benefits in cost savings, efficiency and safety.