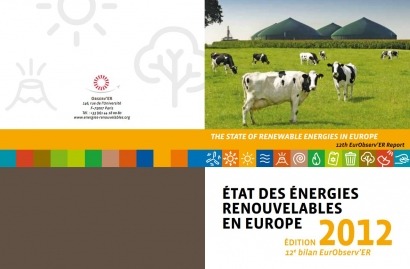 Additionally, the 240-page report, which is available in French and English, presents estimates of renewable energy-related employment and turnover, as well as case studies for seven European regions.

According to the study, the EU-27 renewable energy share of gross final energy consumption amounted to 13.4 percent in 2011 compared to 12.5 percent in 2010, an increase of 0.9 percent.

The report values 2011 economic activity of the EU-27 from renewable energy at more than €137 billion, a three percent improvement on the 2010 figure of €132 billion.

A separate report section focuses on seven regions in the EU: Barnim Uckermark in Germany, Billund municipality in Denmark, Catalunia in Spain, Cornwall in the United Kingdom, Silesia in Poland, South Holland in the Netherlands and Trento in Italy.

The State of Renewable Energies in Europe