Thursday, 01 November 2012
0
REM
Frostburg State University in Western Maryland in the US symbolically "unplugged" its Sustainable Energy Research Facility (SERF) from the electrical grid on 29 October. 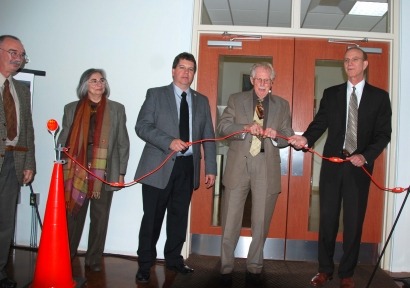 The completely off-grid building in the Allegany Business Center at Frostburg State University (ABC@FSU) will serve as home to a wide variety of renewable energy research projects and instructional classes, as well as being a demonstration and test site for technologies that allow buildings to be separate from the power grid.

"SERF may be off the grid, but it puts Frostburg State University very much on the map as a national leader in renewable energy research, which opens the doors for us to welcome visiting researchers, consultants, companies and other partners who wish to further the study of renewable energy," said FSU President Jonathan Gibralter. "It will greatly help Frostburg raise its visibility and uphold sustainable education in important ways."

The 6,300-square-foot building itself will be a demonstration and test center, as it will be entirely off-grid, powered and heated with all renewable sources, a combination of solar, wind, passive solar and hydrogen fuel cell technology. The building also features a variety of conservation and energy storage options and will continue to develop as new technologies are added.

Dr. Oguz Soysal and Ms. Hilkat Soysal, co-directors of the FSU Renewable Energy Center and faculty in the FSU Department of Physics and Engineering, said they first conceived of a facility like this during the energy crisis of the 1970s. This FSU project has been five years in the making, as solutions to combining the various technologies not previously used together have been developed as contractors, FSU employees and engineers have collaborated.

The approach of twin storms from opposite directions, Hurricane Sandy and a winter storm, as the ceremony was being held was not lost on the dignitaries in attendance," Oguz Soysal said.

"While simultaneously hoping that the storm's impact would be minimal, the hazardous forecast emphasized the role of a facility dedicated to renewable energy and energy resources that were separate from the national electrical grid," he continued. "There couldn't have been any better example to set for the need for renewable energy, sustainable energy work."

The facility is believed to be the nation's only totally off-grid building dedicated to the research of renewable energy generation. Individual homeowners, farmers or small businesses located in the Appalachian region or regions with similar geographic features are expected to benefit from its research.