Wednesday, 30 May 2012
1
Toby Price
The Tel Aviv-based company, Eco Wave Power, has successfully installed a medium-scale wave energy power plant in the Black Sea. The installation of EWP's system, took place during that month in recognition of the international Mother Earth Day, celebrated in more than 175 countries every year. 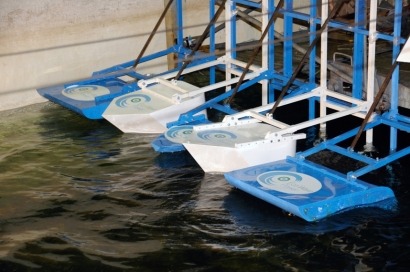 Among the different tests, Eco Wave Power has examined the characteristics of two different floaters shapes: the "Wave Clapper" and the "Power Wing", and also measured output (KW) at different wave heights and periods, measuring the influence of side waves on the floaters and the connections, connecting the floaters to electric devices and showing an electricity supply (with and without an accumulator), examining the influence of floaters in proximity to each other, and examining the option of uniting both floaters in one electric grid and charging a common accumulator:

On 18 and 19 April, the Black Sea experienced stormy conditions enabling Eco Wave Power  to stress-test the floaters' storm-protection mechanisms. “The results were astonishing,” says the company “the floaters survived the storm, without damage”.

In addition, Eco Wave Power concluded that two medium-scale wave energy devices are sufficient for the production of electricity for 6 to 10 households. “Now, imagine what a hundred commercial scale floaters could do!” it says.

The next phase of development will be to move the medium-scale power plant to a different coastal structure, in order to show potential clients that the wave energy generation system can be easily connected to almost any ocean structure. After this, EWP will build its first commercial scale Sea Wave Power Plant, and reveal the construction and production prices, which it claims “will be cheaper than any other renewable or traditional energy generation system”.

"Eco Wave Power is aware of the impact that pollution has on the world. According to a Cornell study, about 40 percent of deaths worldwide are caused by water, air and soil pollution. Such environmental degradation, coupled with the growth in world population, are major causes behind the rapid increase in human diseases. Both factors contribute to the malnourishment and disease susceptibility of 3.7 billion people. EWP wants to prove that there is another way for energy generation. The clean way is the right way for the world," explains David Leb, EWP Founder.

EWP previously tested its small-scale wave energy generation system in cooperation with the Hydro-Mechanical Institute of Kiev in January. The results of the tests were very encouraging, and the officials from the Kiev Institute said at the time that: "All floaters of Eco Wave Power Company have proved their workability… According to the results of the tests, we have reached a decision to recommend enlarging the model to greater sizes."

Eco Wave Power's engineering team has worked hard to fulfil Leb's ambitious dream of executing a fully operational system, able to produce 5KW from each floater, during the first quarter of 2012. This has now been achieved with the launch of the Black Sea device.

[Editor's note: A fun video of EWP's technology with an introduction by JF Kennedy (!) is available here.]