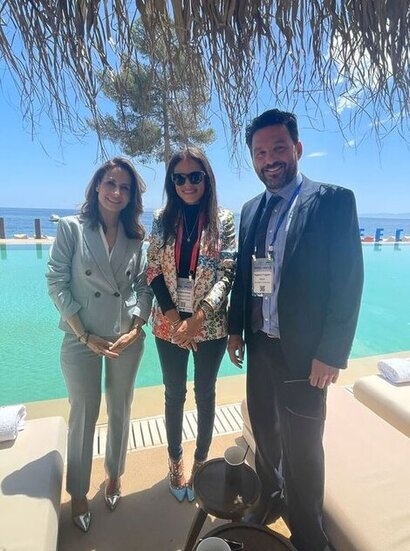 Ms Braverman spoke during a session titled “Innovation for Good: Facing Global Solutions Through Tech Solutions” and detailed the advantages of wave energy. She also presented the Company’s newly planned project in the island of Halki in Greece.

“The Eco Wave Power technology is smart, simple and easy to implement” said Ms Braverman. “The only part of the system that is in the water are the floaters, which belong in the water, and all the expensive energy conversion equipment is located on land just like a regular power station. According to the forecasts, wave energy is expected to provide around 10 percent of all Europe’s electricity by 2050. Our commercialisation plan includes our upcoming project in Israel, which is co-funded by the Israeli Energy Ministry, that recognised the Eco Wave Power technology as a pioneering technology, and EDF Renewables IL. We are also planning our first US project on the AltaSea premises in the Port of Los Angeles, to be followed by commercial scale projects in Spain, Portugal and other locations in the Company’s 327.7 megawatts projects pipeline. I am also here to present our newest project in Greece, in Halki Island. Basically, the island wants to be 100 percent green and renewable, and it recently received a recognition for being the Sustainable Initiative of the Year for its admirable efforts.”

Ms Braverman added that the island is planning to combine 1 MW of solar energy, 1 MW of wind energy and 1 MW of wave energy and the EU programme New Energy Solutions Optimised for Island (NESOI) is providing funding for Eco Wave Power’s feasibility study in the island that the company expects to complete by the end of the year. This will enable the construction of the first ever grid-connected 1 MW wave energy array in Greece.

After the presentation, Ms. Braverman also met with the Israeli Minister of Innovation, Science and Technology- Orit Farkash-Hacohen, and invited her for the official launch of the first soon to be grid connected wave energy project in Israel.

Also, in attendance at the Israel-Greece Conference was Mayor Angelos Fragakis of Halki. The Greek Island of Halki is rapidly becoming known as Greece’s “green island” – the first of several islands to be transformed by the Greek government as part of the “GR-Eco” project, which provides the islands with renewable energy sources, making them independent of the national grid.

Halki Island currently has a solar power plant and electric vehicles, and Mayor Fragakis is looking to add wave power to the island’s growing collection of sustainable initiatives.

“Halki Island is constantly looking for new energy solutions” said Mayor Fragakis. “Eco Wave Power’s use of wave technology is a prime example of why ‘GR-Eco’ was formed: to foster new technology that can help each island in Greece be self-sustained and help do our part in the global fight against climate change.”