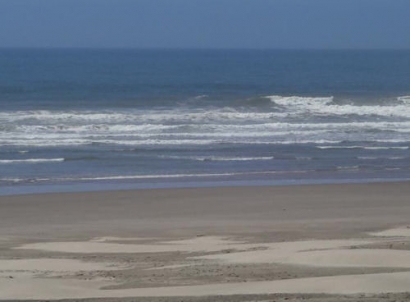 PacWave South is the first commercial-scale, utility grid-connected test site in the United States to obtain a FERC license and will be the first marine renewable energy research facility in federal waters off the Pacific Coast.

The test site, located about seven miles offshore southwest of Newport, Oregon, will offer wave energy developers the opportunity to try different technologies for harnessing the power of ocean waves and transmitting that energy to the local electrical grid.

“This is a landmark moment for the state of Oregon, for wave energy development nationally and for Oregon State University,” said OSU President F. King Alexander. “We are excited for the future of PacWave South. This license and project would not be possible without the assistance and support of local, state and federal officials and community members who helped guide and shape PacWave South over the years.”

FERC requires the filing and final review of a series of environmental and engineering plans before construction is authorized. Those documents are nearly complete and OSU project leaders hope to obtain construction authorization later this spring. Current timelines suggest construction could begin this summer, and the facility should be operational by 2023.

“We know there is still work to do to make this project a reality, but this is a huge moment for this project and for the industry as a whole,” said Burke Hales, chief scientist for PacWave. “This is the first license of its type to be issued in the United States.”

Wave energy has the potential to provide clean, reliable electricity to help meet the world’s rising energy demands, experts say. Globally, the marine energy market is projected to reach nearly $700 billion by 2050, and the World Energy Council estimates that 10% of the worldwide electricity demand could be met by harvesting ocean energy.

Oregon State has pursued development of a wave energy testing facility for more than a decade to accelerate the development of this industry. There currently is no U.S. facility for developers to measure the electrical and environmental performance of their devices at this scale. Oregon State filed its license application with FERC nearly two years ago, and the application process also included an extensive environmental review.

“Oregon State has laid a foundation for future development of this industry through its collaborative approach of working with all the key stakeholders and ultimately seeking and obtaining regulatory approval for such a facility,” said PacWave Project Manager Justin Klure.

“This is a significant milestone for Oregon State and for PacWave, but it is also an important milestone for the industry, because of the project’s approach to addressing environmental uncertainty and its overall commitment to advancing the state of marine renewable energy. The knowledge developed during this process and the precedent set for how to approach new projects like this will likely be used for years to come.”

With its connection to the local power grid, the approximately $80 million PacWave South facility will provide wave energy developers with the ability to test both the efficacy of the devices as well as mechanisms for turning the energy they capture into a commodity with value on the energy market.

The ocean test site will be located about seven miles offshore on a sandy-bottomed stretch of the Pacific Ocean away from popular commercial and recreational fishing reefs. The ocean site will have four different testing “berths,” which combined can accommodate up to 20 wave energy devices at any one time.

Power and data cables buried below the seafloor will connect the ocean test site to a shore-based facility in Seal Rock. Construction will begin with underground installation of the conduits that will house the power cables.

Crews will work from a base at Driftwood Beach State Recreation Site and use horizontal directional drilling to install the cable conduits. Work to place the conduits could begin this summer with installation of the cables anticipated in late 2022 or early 2023, depending on weather conditions, Klure said.

Construction of the shore-based utility connection and monitoring facility, which operates similar to a power substation, is also expected to begin later this year. There, wave-generated power will be conditioned, a process to ready the power so it can be added to the local power grid, which is operated by the Central Lincoln People’s Utility District.

PacWave South is supported by grants from the U.S. Department of Energy, the state of Oregon and other public and private entities. Oregon State’s College of Earth, Ocean, and Atmospheric Sciences is managing the construction and operation of the facility.

About the OSU College of Earth, Ocean, and Atmospheric Sciences (CEOAS): The college is renowned for research excellence and academic programs that span the earth, ocean and climate sciences, as well as the human dimensions of environmental change. CEOAS inspires scientific solutions for Oregon and the world.