Wednesday, 18 January 2023
0
Robin Whitlock
A project aiming to maximise tidal energy generation has been launched in the presence of Her Royal Highness, The Princess Royal, at the University of Edinburgh’s FastBlade facility. 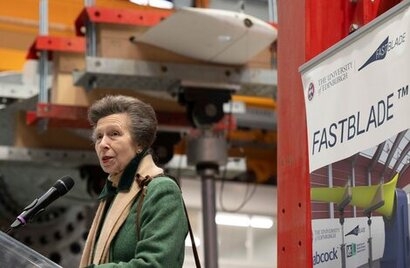 Her Royal Highness, The Princess Royal. Courtesy of Neil Hanna.

The Princess Royal, who is also Chancellor of the University of Edinburgh, visited on Tuesday 17 January to meet colleagues from the testing facility and partners of the new MAXBlade project.

The 10 million euro project – funded by the European Union and UK Research and Innovation – aims to deliver a range of innovations to improve the performance of tidal turbines and reduce costs. It will investigate the full lifecycle of tidal turbine blades, from materials, manufacture and operation, to decommissioning and recyclability. The project’s long-term aim is to ensure the European composite sector becomes the international leader in tidal blade manufacture.

The project plans to increase the area harnessed by Scottish tidal technology company Orbital Marine Power to generate power – known as the rotor swept area – by 70 percent, to more than 1,000 square metres. MAXBlade will increase the length of the turbine blades from 10 to 13 metres – making them the longest of their kind in the world. The team says that boosting blade length will have the single greatest impact on reducing the cost of tidal energy.

Modelling by the University of Edinburgh’s Institute of Energy Systems estimates £40 billion could be generated for the UK economy by harnessing wave and tidal energy.

The project will involve a two-year design and development phase, followed by an 18-month build, during which blades will undergo advanced structural testing at FastBlade. The technology will then undergo two years of real-world testing at the European Marine Energy Centre (EMEC) in Orkney. Two of Orbital Marine Power’s O2 floating platforms – the world’s most powerful tidal turbines – will each be fitted with four of the newly developed blades.

The team aims to generate 120,000 hours of performance data that will be assessed by EMEC and project partner TECNALIA, a research and technological development centre.

Innovations from MAXBlade will be integrated with findings from its sister project, FORWARD2030, to enable large-scale production of Orbital’s O2 turbine technology. This will pave the way to the tidal energy sector making significant contributions towards Europe’s energy systems, energy security and industrial development by 2030 and beyond to 2050, the team says.

“Orbital is delighted to be involved with so many great partners on this truly cutting-edge project” said Andrew Scott, Chief Executive Officer at Orbital Marine Power. “MAXBlade will help deliver tidal energy into a future, low-carbon energy mix at lower costs while, at the same time, position UK & European businesses to benefit from long-term industrial opportunities that will come from this new, sustainable industry.”

Professor Conchúr Ó Brádaigh, Head of School and Chair of Materials Engineering at Edinburgh University, added that the MAXBlade project will demonstrate the unique rapid testing capability of the FastBlade facility.

“This will help the tidal energy industry to de-risk their ongoing turbine developments and provide low-cost, reliable renewable energy to the grid” said Professor Ó Brádaigh. “We will also lead the development of thermoplastic resins in MAXBlade and the circular economy roadmap needed for future tidal blade manufacturing and recycling.”