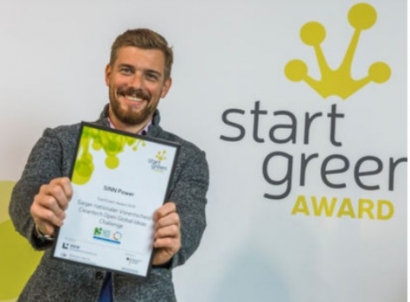 As part of SINN Power’s nomination as semi-finalist of the StartGreen Award 2019 the RKW Kompetenzzentrum nominated SINN Power as one of the three national champions for the CTO Global Ideas Challenge and supported the trip to Los Angeles. As a result, the German startup won the Global Ideas Award 2019 and received the $10.000 prize.

The CTO Global Forum is an annual industry get-together and consists of a unique pitch workshop, several investor rounds with America’s best-known cleantech investors and two competitions, the CTO National Challenge and the CTO Global Ideas Challenge to distinguish innovations, both nationally and globally.

The event supports startups and their business ideas in order to recognize and promote international growth and lead a path towards a sustainable future.

Johannes Stuck, Head of Business Development at SINN Power, is not only pleased with the result, but also very happy about the many impressions and experiences he was able to gain in Los Angeles.

“I am very proud that we were able to take the award home as the Global Ideas Winner 2019! I am also very thankful to be a part of this impressive network and all the interesting talks we were enabled to have," Stuck said.

SINN Power also had the chance to share the potential of its high-tech wave energy converter to harness renewable energy from ocean waves in front of an expert audience. As part of the award ceremony of the StartGreen Awards on November 20th in Berlin, SINN Power was able to pitch in front of the German audience and report on the impressions and experience gained in Los Angeles.