Tidal energy could contribute £27 billion to the UK economy

Friday, 18 July 2014
0
Robin Whitlock
A new report published by the Centre for Economics and Business Research (CEBR) has found that construction of six tidal lagoons across the UK could contribute £27 billion to UK GDP. 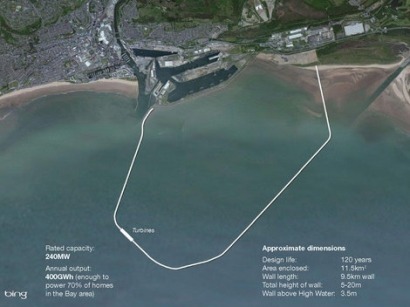 The report assesses the economic benefits that could be derived from Tidal Lagoon Power’s proposed tidal lagoons. It finds that the twelve year construction period could contribute £27 billion to the economy while also generating 36,000 jobs with up to 71,000 jobs at its peak.

Once fully operational, the lagoons could contribute £3.1 billion in GDP annually over the 120-year design life, generating enough energy to power almost 8 million homes. Taking into account the balance of payments effect, the operation of the lagoons could create or sustain as many as 40,000 jobs, contribute £5.8bn in GDP per year to the UK economy and account for 0.24 percent of annual GDP. Export of electricity from the lagoons, in addition to the components and expertise deployed in supporting the delivery of tidal projects abroad and reductions in fossil fuel imports, could also increase net exports by as much as £3.7 billion per year by 2040, equivalent to 13 percent of the current UK trade deficit.

Given that the majority of the proposed lagoons are to be based in relatively deprived areas, the construction phase and operation will provide a much-needed stimulus to local economies, especially as a high proportion of the associated economic benefits are forecast to remain in those regions. The lagoons could also offer a solution to coastal flooding problems.

“Tidal lagoon is not the only renewable technology being deployed in the UK but it could be the important missing piece in the energy generation mix” said Douglas McWilliams, Founder and Executive Chairman of the CEBR. “In contrast to wind and solar, it produces totally predictable power 14 hours a day, reducing the cost of stand-by generators. The electricity it produces is expected to be cheaper than offshore wind and similar in cost to new nuclear. What this study demonstrates is that, not only does a tidal lagoon industry have the potential to make a significant contribution to the UK economy, but that it can also help secure our energy independence for many years to come. As such, the study is an important and timely contribution to the debate on this country’s energy future.”

Mark Shorrock, CEO of Tidal Lagoon Power Ltd added that the study clearly demonstrates that the annual benefits to the national economy would be enormous, immediate and long-lived. He said that the company’s proposals for the Swansea Bay lagoon have demonstrated that it is possible to marry economic benefit with environmental sensitivity and social acceptance. This project in particular will establish a blueprint for an infrastructure roll-out that could account for ten percent or more of UK growth.