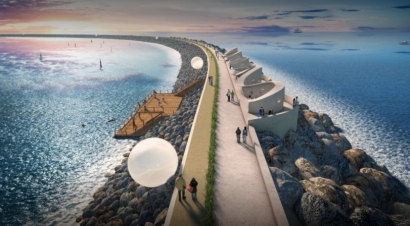 MP Gregory Clark, who is also the Britain's secretary of Business, Energy and Industrial Strategy, said in the end, the £1.3 billion ($1.7 billion) project was not a value for the money.

Speaking in the House of Commons, Clark said, "The inescapable conclusion of an extensive analysis is that however novel and appealing the proposal that has been made is...the costs that would be incurred by consumers and taxpayers would be so much higher than alternative sources of low carbon power, that it would be irresponsible to enter into a contract with the provider.

"Securing our energy needs into the future has to be done seriously and, when much cheaper alternatives exist, no individual project, and no particular technology, can proceed at any price. That is true for all technologies."

The project's developers, Tidal Lagoon Power, had hoped Swansea would be the first in a series of developments along the western coast of the United Kingdom from Cardiff to Colwyn Bay.

The project already had £200 million ($266 million) backing from the Welsh Government, but the UK government said it would not pay the developers the fee it wanted for the energy.

During his extended remarks, Clark pointed to a government analysis that suggested the project would have cost the average British consumer an additional £700 ($930) between 2031 and 2050, or the equivalent of £15,000 ($20,000) for every household in Wales.

But Mark Shorrock, Tidal Lagoon Power's chief executive, said the government's numbers are wrong and that the investment sought was only enough needed to "kick start" the tidal energy industry in the United Kingdom.

"It's a very, very sad day for Wales, for Swansea," he told the Good Evening Wales program, which airs on BBC Radio Wales.

That sentiment was echoed by Carwyn Jones, the first minister of Wales, who said via Twitter, "The UK government has today dealt another crushing blow to Wales and the Swansea community.

"From day one, the Welsh government recognized the transformational potential of the Swansea Bay tidal lagoon and committed to doing all we could to make the project a reality,” Jones continued. "Sadly, the UK government's short-sightedness and complete lack of ambition has thwarted this project, which could have positioned the UK as a world leader in a new global industry.

"Despite our serious offer to help the UK government make this proposal work, they are letting this opportunity slip through their fingers," he concluded.

Other Twitter users were equally upset by the decision. Eddie Bayton, who identifies himself as a cricket groundsman in Lancashire, said, “if 10 Downing Street announced this afternoon that the Swansea Tidal Lagoon cannot be backed and Parliament later vote to approve [an expansion of Heathrow Airport], thus centralizing investment in Southeast England, then it is difficult to think of this as anything but a poke in the eye for Wales."

Joe Frampton, a fair housing advocate in Wales, tweeted before the decision was announced that "anyone who's studied the numbers in detail enough can see lagoons will provide real value for money long term."

Rémi Gruet, CEO of Ocean Energy Europe, said in a statement that despite Monday's decision, the industry is awaiting clarity from the government on whether other emerging renewable technologies such as tidal stream and wave energy are to be developed in the United Kingdom.

"The UK government should now make sure it doesn’t miss out on other emerging technologies such as tidal stream or wave energy," he said.