Friday, 11 October 2019
0
Dan McCue
Vigor Industrial of Portland, Oregon, has completed construction of the 826-ton “OE Buoy” for Irish company, Ocean Energy. The buoy was preparing  for  launch from the company's Swan Island shipyard on Thursday, October 10, to begin its journey to Oahu, Hawaii. 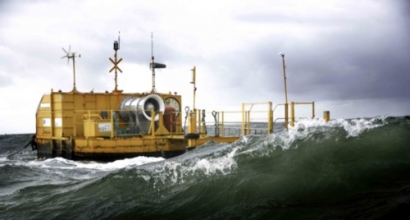 The buoy, which measures 125 x 59 feet with a draft of 31 feet, has a potential rated capacity of up to 1.25 MW in electrical power production.

Commenting on their partnership with Ocean Energy, Vigor CEO Frank Foti, noted that his company has been actively engaged in building wave energy devices and their components for over 10 years.

“We are thrilled to be participating in this project with Ocean Energy toward the ongoing goal of a cleaner energy future for our planet. This project represents a solid step forward in developing a commercially viable product to help move us in that critical direction.”

According to Ocean Energy, each deployed commercial device could reduce CO2 emissions by over 3,600 tons annually, which for a utility-scale wave farm of 100 MW could amount to over 180,000 tons of CO2 in a full year. It is estimated that a 100 MW wave farm could power up to 18,750 American homes.

The buoy will be deployed at U.S. Navy Wave Energy Test Site in Kanehoe Bay Hawaii for 12 months.

The $12 million project is funded in part by the US Department of Energy’s office of Energy Efficiency and Renewable Energy (EERE) and the Sustainable Energy Authority of Ireland (SEAI), under an agreement committing the American and Irish governments to collaborating on Marine Hydrokinetic Technologies.

According to John McCarthy, chief executive officer of Ocean Energy, the scale and ambition of the OE Buoy project is unique and transformative. “This first-of-its kind wave energy convertor is scalable, reliable and capable of generating sustainable power to facilitate a range of use-cases that were previously unimaginable or just impractical.”