Alphabet’s Energy Storage Plans Include Vats of Salt and Antifreeze 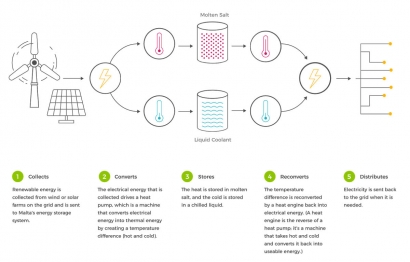 The project, code-named “Malta” is tackling the “mismatch” between the abundance of renewable energy from wind and solar and the lack of cost-effective technologies to store it, especially during peak power usage.

The prototype was built employing an approach invented by physicist Robert Laughlin, who is a consultant on the project. The system consists of four tanks connected to a heat pump. When supply of power exceeds demand the electricity is converted into two streams of air; one cold and one hot.

The cool air is funneled to the tanks containing antifreeze and the hot air heats up the salt. Alphabet claims the process can be reversed to produce two powerful gusts that spin a turbine, which returns the captured power to the grid.

Laughlin’s work has been used as the basis for other projects in the past however Alphabet has made the system more cost-effective since their solution doesn’t require the expensive ceramics and steels that have historically been used to regulate temperatures.

The new system can theoretically retain energy for many hours or days, much longer than traditional lithium-ion batteries.

According to Bloomberg New Energy Finance analyst Yayoi Sekine. "It could potentially compete with lithium-ion, but there are a lot of challenges that an emerging technology has to face."