Thursday, 20 April 2017
0
Robin Whitlock
A consortium led by the Australian Macquarie Group has agreed to acquire the UK Green Investment Bank plc from the UK Government for £2.3 billion, although the sale of the bank has been severely criticised. 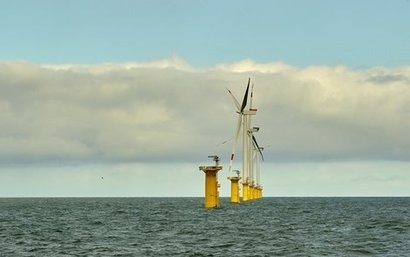 The consortium led by Macquarie Group also includes Macquarie European Infrastructure Fund 5 (MEIF5) and Universities Superannuation Scheme (USS). Upon completion, Macquarie will be the owner of the Green Investment Bank with ‘special share’ arrangements to safeguard its green purpose which will be held by five independent trustees. The GIB will manage or supervise over £4 billion of green infrastructure assets and projects, with investors including MEIF5, USS, GCP Infrastructure and the UK Government. It will also establish three new investment vehicles – an offshore wind investment vehicle, a low carbon lending platform and a green infrastructure investment platform.

Macquarie says the GIB will become its platform for principal investments in green infrastructure projects in the UK and Europe. The group has been a substantial investor in the UK’s renewable energy sector in its own right so far and it says it will integrate its existing UK green energy principal investing business into the GIB, maintaining its platform, brand and Edinburgh office and with a substantial staff presence in Edinburgh. Macquarie also says that the business will be led by senior Green Investment Bank executives, supported by key existing functions.

Under Macquarie’s ownership, the Green Investment Bank will have a newly established target of £3 billion of new investment in green energy projects over the next three years, either directly or by arranging capital from other investors. Subject to the availability of suitable opportunities, anticipated investments will span energy efficiency, bioenergy, energy from waste, onshore and offshore wind, solar and tidal energy and energy storage. The GIB will target investments in both equity and debt and at all project stages including development, construction and operation.

Macquarie says that the GIB will continue to operate in accordance with its green purpose and green objectives and in line with the ‘special share’ arrangements. This will include publishing an annual report on its green performance, holding an annual industry day for stakeholders and green reporting.

The group intends to employ one of Europe’s largest teams of green energy investment specialists, across the GIB based in Edinburgh and the group’s own operations in London. A new revenue-generating project delivery team in Edinburgh will provide critical technical, risk, project management and advisory services to green infrastructure investments managed by both the GIB and Macquarie.

Macquarie says that, thus far, the GIB and the Macquarie Group have led a combined £15 billion of investment in the UK low carbon economy during the past five years. This includes investments in projects representing more than 60 per cent of the UK’s offshore wind generation capacity, 50 waste and bioenergy projects, and 1.8 GW of solar projects. Macquarie is currently also advising on 850 MW of tidal projects under development. Its own UK green infrastructure investments include building the world’s largest bioenergy plant in Teesside, Race Bank, one of the UK’s largest offshore wind farms, installing over 2 million smart meters in UK homes, and retrofitting energy efficient street lighting in Nottingham and Tay Valley. More broadly, Macquarie has led over £35 billion of investment in UK infrastructure, including the National Grid gas distribution networks, the Mersey Gateway Bridge and the Edinburgh Hospital for Sick Children.

The introduction of these investors brings new private capital from day one and enables the Green Investment Bank to recycle capital into new projects while growing assets under management.

“It is a privilege to be selected by HM Government to acquire the Green Investment Bank” said Daniel Wong, Head of Macquarie Capital, Europe. “The Green Investment Bank is a pioneering business, with outstanding people, expertise, credentials, brand and networks. By combining the Green Investment Bank with the largest infrastructure investor in the world, we will create a market leading platform dedicated to investment in the low carbon economy in the UK and beyond. We understand the responsibilities that come with this ownership, and we are fully committed to maintaining its green purpose as we grow the business.”

Martin Stanley, Global Head of Macquarie Infrastructure and Real Assets (MIRA), added that the opportunity to deploy capital from MEIF5 into the Green Investment Bank’s offshore wind platform provides the fund with an attractive investment in a diverse portfolio of offshore wind assets in the UK. This acquisition will provide the investors in the fund, which include UK and international pension funds and institutions, with long-term exposure to well-managed businesses in well-regulated and established markets.

The acquisition has received significant criticism from within the UK, critics arguing that it is the wrong time to sell this asset. Speaking to Business Green, Nick Mabey, chief executive of E3G, said that the sale “…will undermine the government's industrial strategy” and that “all of the major political parties are firmly committed to replacing our ageing energy infrastructure, with this sale the government has made this crucial job harder and more expensive. Britain simply cannot afford unforced errors like this.”

Caroline Lucas, co-leader of the Green party, claimed that the safeguards promised by the Government are "worthless" and that its decision to offload GIB has been reckless. Earlier this morning (20th April), she described the sale as “a kick in the teeth for the green economy” and claimed that once the GIB is sold, Macquarie will be able to do what it likes with it, potentially including using it to fund fracking operations. She also questioned how much of the promised £3 billion will actually be invested in UK green infrastructure.

Mary Creagh, chair of the Environmental Audit Committee, also criticised the move, arguing that the Government has decided to “sell it off without transparency or consideration of the alternatives”.

The transaction is expected to complete in the first half of 2017 subject to regulatory approvals and is not material to Macquarie Group’s earnings and financial position.