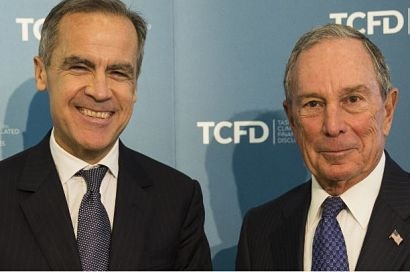 On the two-year anniversary of the Paris Agreement, 237 companies with a combined market capitalization of over $6.3 trillion have publicly committed to support the Bloomberg-led Task Force on Climate-related Financial Disclosures (TCFD). This includes over 150 financial firms responsible for assets of over $81.7 trillion.

The TCFD announced the growing support at the One Planet Summit hosted by French President Emmanual Macron, celebrating the two-year anniversary. The TCFD is led by Bloomberg and was established by the Financial Stability Board (FSB), which is chaired by Bank of England Governor Mark Carney. The companies and organizations supporting the TCFD span the entire capital and investment chain – from companies that issue equity and debt to the largest credit rating agencies to stock exchanges, and ultimately to investors that buy the equities and debt.

Companies’ adoption of the TCFD recommendations is a step forward in helping financial markets price climate-related risks and ensuring a smooth transition to a low-carbon economy, which is fundamental to delivering on the Paris Agreement.

“Climate change poses both economic risks and opportunities” said Bloomberg. “But right now, companies don’t have the data they need to accurately measure the risks and evaluate the opportunities. The Task Force’s recommendations will help change that by empowering companies to measure and report risks in a more standardized way.”

FSB Chair and Bank of England Governor Mark Carney added that markets need the right information to seize the opportunities and mitigate the risks that are being created by the transition to a low-carbon economy.

By this time next year, and in time for the Argentine G20 Summit, the Task Force will report on implementation experience, including examples of good practices to support and foster wider adoption.

The Task Force will also launch a web-based platform to better support companies interested in implementing its recommendations. The new ‘TCFD Knowledge Hub’ will provide tools and other implementation resources as well as references and links to other climate-related disclosure frameworks that have incorporated the TCFD recommendations. The knowledge hub will go live in the first quarter of 2018.