Friday, 11 December 2015
0
Robin Whitlock
The achievements of the UK city of Bristol have been recognised by a high-level international panel organised by the European Commission at the UN’s COP21 global climate talks in Paris. 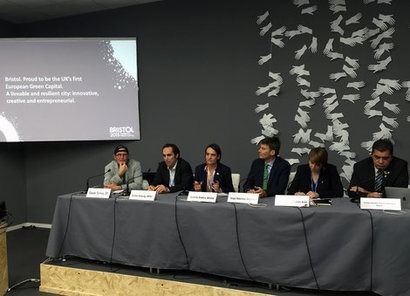 Bristol City Councillor Daniella Radice, who is also the Assistant Mayor for Neighbourhoods including the Environment at Bristol City Council, presented the city’s successes including its solar projects which have helped the share of renewables in Bristol’s energy supply soar to 25 percent. The session, ‘Renewable Energy: Energising The Future’ presented renewable energy projects already being implemented in cities around the world. It also investigated how to accelerate these developments. Stefan Schurig, Director of the Future of Cities and Climate and Energy department at the World Future Energy Council, presented an opening discussion on ‘What does it take for cities to achieve 100% renewable?’

Cllr Radice described one of Bristol’s Transformative Action Plans (TAPs), The Bristol Billion, which is designed to invest $1 billion (£700 million) making the city’s buildings more energy efficient to achieve significant carbon and energy savings. It would involve refurbishing 56,000 homes in Bristol – 30 percent of the city – to reduce energy use, help lift people out of fuel poverty and reduce health costs.

“We are in Paris to exchange ideas with other cities and to attract investment in projects to transform Bristol” Cllr Radice said. “We have the lowest per capita carbon emissions of all the large UK cities, but I have been sitting at the table with even more ambitious cities such as Vancouver and Malmo, which shows the challenge we have ahead in terms of being in the very top league internationally. We have a clear picture of where to go as a city but we know we need investment to help, and we have sent this message loudly and clearly to a broad range of people and organisations at this world summit.”

Bristol City Council has installed 1.3 MW capacity of solar PV on its own operational buildings. In 2015 alone it has rolled out 650 kW, with a further 250 kW planned before the end of this year. A total of 3,600 solar panels will have been installed, saving around 340 tonnes of CO2 each year. The council, which already holds 5 MW capacity from two wind turbines since 2013, has plans to complete two solar parks with 10.2 MW combined capacity in the coming months.