Thursday, 23 January 2020
0
Robin Whitlock
Comparison website Compare the Market has analysed the energy consumption of 21 countries to reveal which are using the most and least renewable energy sources in their total consumption.

Across the world, countries are facing increasing pressure to reduce the ecological imprint they leave on the planet, slow down climate change, and protect the environment for future generations. Greater emphasis has been placed on the importance of transitioning to using renewable energy, instead of fossil fuels.

With renewable energy varying from wind, solar, hydropower and bioenergy, there are an increasing number of more environmentally-friendly options for producing the energy our global society uses each day.

Germany leads the world with a renewable energy consumption of 12.74 percent of their total energy use. This European nation is on an energy revolution aimed at replacing its fossil fuels with wind and solar technology, which scientists agree is pivotal for every country to adopt in order to avoid a climate disaster across the globe.

In particular, Germany has been working to reduce its coal use, with the first half of 2019 seeing the country use more renewable sources of energy to produce electricity than coal and nuclear power combined, a first for the country. In addition, renewables accounted for 40% of Germany’s electricity consumption in 2018, and more work is being done to continue the rise in renewable energy use.

The UK ranks second in their renewable energy use at 11.05 percent in the country’s total consumption. Wind power has been particularly prevalent, with a new energy record set when wind provided over 40 percent of the nation’s power.

The USA ranks at 10th with a renewable energy proportion of less than half that of the UK and nearly three times less that of Germany at 4.32 percent. South Africa ranks at 15th with even lower renewable use levels at just 2.25 percent. Other countries with a particularly low consumption include Mexico at 1.65 percent, South Korea at 1.63 percent and Russia at 0.04 percent. And whilst the likes of Germany and the UK are leading the way, it is critical that these figures continue to rise over the next few years for all countries across the globe. 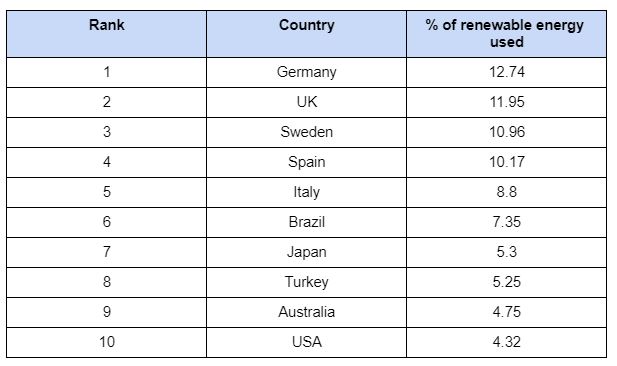 With the world facing increasing demands to slow down and stop climate change, it is pivotal the adoption of renewable energy continues. A UN report predicts that by 2050 the population will reach a whopping 9.8 billion and by 2100 this will rise further to 11.2 billion. With the increasing number of people living on the planet, the demand for energy will naturally increase, and it is crucial that we are catering for this in an environmentally conscious way that is not damaging to the planet.

By 2050, the International Renewable Energy Agency (IRENA) reveal that renewable power is expected to provide the majority of global power at an impressive 86 percent. With Germany leading the renewable energy consumption at 12.74 percent, there is a long way to go for all countries across the globe to meet these targets.

“It’s very important to not only be aware of how much energy from non-renewable sources is being used both individually and globally, but to put that in a context that everyone can understand” said Peter Earl from the Energy team at Compare the Market. “Championing the countries that are leading the way in using renewable energy is equally important and we are proud to see the UK is one of the countries highest up in the league table.”