Tuesday, 24 September 2019
0
REM
Speaking at the business forum of the United Nations’ 2019 Climate Action Summit, held in New York on September 23, José Manuel Entrecanales, chairman and CEO of ACCIONA, said "integrating carbon prices in the costs of a company's internal operations is one of the most effective measures" that any corporation can take in the fight against the climate emergency. 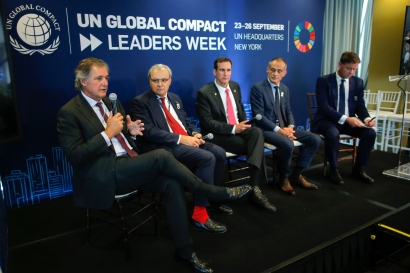 "This is the moment of truth; either we tackle this situation now, or we will struggle to achieve our targets as a society.”

Entrecanales explained that, with the right incentives, corporate executives can quickly find solutions to achieve their goals, and formulas to reduce their emissions are not an exception.

ACCIONA began involving business areas in the internalization of CO2 costs in order to become a carbon-neutral company in 2016. "We have a special situation. We are, among other things, a renewable energy company,” said Entrecanales, who indicated that the firm is continuing to further reduce its emissions.

"However, no matter how much we do in-house, what we have is a problem of scale," he said. "There are millions of companies that have yet to hear about this; this is an urgent issue and a challenge.”

Among the necessary measures that governments need to carry out to combat the climate crisis, Entrecanales highlighted the European Union’s initiative that aims to develop a new corporate taxonomy through identifying 67 sustainable business activities that will be key in the new "low-carbon economic sector”.

He also suggested increasing public administrations’ climate demands in public procurement and developing processes that boost financing for the new sector, among other measures.

ACCIONA has joined 87 other large corporations from 27 different countries, combining a market capitalization of $2.3 trillion, that have pledged to limit the global temperature increase to 1.5ºC, as well as to reach 'zero emissions' by 2050.

This initiative, sponsored by the United Nations Global Compact and the Science Based Targets initiative (SBTi), among others, is the result of the call for climate action made public in June by a group of companies, civilians and the United Nations itself, also signed by ACCIONA at the time.

ACCIONA also agreed to the request made by the Carbon Pricing Leadership Coalition (CPLC) to establish "stable and long-term carbon pricing policies", which will serve as basic tools to combat climate change.

During the Summit, the CPLC, a group of government leaders, companies, civilians and academics, presented a report on business concerns surrounding industrial competitiveness. The report concludes that these concerns can be addressed through sound carbon pricing policies. The CPLC recommended a price per ton of carbon emitted that ranges from $40 to $80 in 2020.

Finally, ACCIONA, together with a large group of firms, also signed a commitment to a fair energy transition that contemplates decent green employment.

"We as a company have a responsibility, along with governments, investors and other stakeholders to deliver a just transition, delivering a prosperous, green economy for all. As part of that responsibility, we must ensure new jobs created in low emissions sectors are fair, decent and inclusive jobs,” ACCIONA’s commitment reads.