Thursday, 02 August 2012
0
Toby Price
The social networking company Facebook has published its 2011 energy and carbon footprint data and announced a 2015 goal of powering 25% of the platform with renewable energy. The company declares that it has chosen to release this data because it believes in “the power of openness”, and because it hopes that “adding another data point to our collective understanding of our industry’s environmental impact will help us all keep improving”. 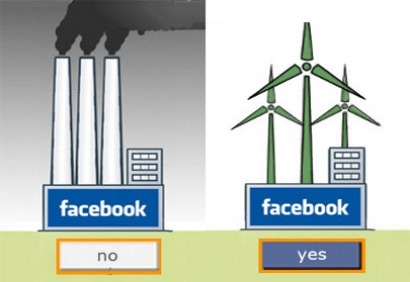 Facebook has previously been criticised by the likes of Greenpeace for not been more open about its energy use and committing more to renewable energies, and this latest development will  says Greenpeace, help “ensure that the skyrocketing growth of cloud computing is powered by clean sources of energy”.

According to the figures released yesterday, the total annual carbon footprint per monthly active Facebook user is 269 grams. To put this number into context, one person’s Facebook use for all of 2011 had roughly the same carbon footprint as one medium latte,  three large bananas or a couple of glasses of wine, the company estimates.

While the 25% renewables target for 2015 is positive, it is only 2 percentage points higher than Facebook’s current renewables and clean energy share of 23%. Furthermore, 27% of its energy mix still comprises coal, 17% natural gas, 13% nuclear and 20% uncategorized (energy that’s purchased by utilities on the spot market and can include any or all of these categories).

Facebook also reveals that reducing its impact and significantly altering its energy mix in the short term will be “challenging”.

“The reality is that as a fast-growing company our carbon footprint and energy mix may get worse before they get better. When we bring our Lulea, Sweden, data centre online in 2014, we expect to see a steady increase in the clean and renewable sources powering our data center operations. And we’ve set a company goal to derive at least 25% of our energy mix from clean and renewable sources by 2015. We know this is going to be a stretch for us, and we’re still figuring out exactly what it will take to get there,” said the company on a blog post yesterday.

In the interim, the company intends to maintain its focus on maximizing efficiency in operations and sharing its strategies for doing so via the Open Compute Project. It will also continue trying to introduce more clean and renewable energy into the mix that powers its data centres by:

• Including a preference for locations that have access to clean and renewable energy sources in our data centre siting policy;

• Engaging with environmental organizations, our industry peers and our utility providers to advocate for more clean and renewable energy sources in the overall energy mix available to all consumers;

• Including a renewable energy component to every new data centre we build so we can learn more about what such investments mean for Facebook. The small solar installation at our Prineville data centre is a good example of the kinds of projects we’ll undertake.

“We also know that there is great opportunity in the power of our platform and the more than 950 million people who use Facebook. Through our facebook.com/green page and investment in partnerships, we are aiming to drive environmental awareness, education and action,” says Facebook.

For example, the company recently partnered with the Natural Resources Defense Council and Opower to help develop an app allowing people to track their home energy use, compare it with their friends’ and share tips on how to save energy. “As Facebook seeks to track and manage our own energy use, we want to make it easy for the people who use Facebook to do the same,” it says.

Unfortunately, Greenpeace stresses that the transparency Facebook showed yesterday is still rare among the companies behind our online world.  Some of the largest players behind the cloud, such as Amazon, still refuse to disclose any information about their energy use and mix.