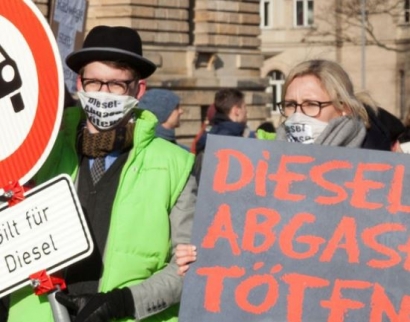 The ruling by the Germany's Federal Administrative Court in Leipzig is a resonantly emotional issue in the country where the diesel engine was invented by Rudolf Diesel 125 years ago.

It also came at a sensitive time in German politics.

It was only on Monday that German Chancellor Angela Merkel rallied her party, the Christian Democratic Union, behind a proposed new government with the center-left Social Democrats.

So it wasn't surprising that Merkel's administration was responsive when auto dealers and manufacturers -- powerful players in the German economy --  complained the sweeping ruling would hurt them financially, and driver's said citywide bans of diesel vehicles would up-end their lives.

The proposed fix is to create a label, a blue badge, that would distinguish low emissions vehicles from dirtier models.

In a statement, government spokesman Steffen Seibert said the proposal would be taken up quickly by Merkel's new cabinet, possibly as soon as next month.

It is estimated that one in three passenger cars in Germany are diesel-powered, and that nearly 20 million diesel cars, trucks and other commercial vehicles would be impacted by the ruling.

While German motorists have long preferred diesel-powered vehicles to gas-powered alternatives, diesel cars and trucks emit nitrogen oxides, or NOx, that causes respiratory illnesses and are blamed for thousands of premature deaths annually.

German environmentalists have pushed for years for the government to address air pollution problems in the nation's cities, but after years of rejection, they'd come to believe their concerns were taking a back seat to the preferences of the Germany's automotive giants, BMW, Daimler, and Volkswagen and the auto industry's lobby.

They eventually turned to the courts, suing scores of German cities, to compel them to address the pollution issue. Two German states --  Stuttgart and Duesseldorf  -- appealed lower court decisions that suggested bans on particularly dirty diesel cars would be effective. That moved the case to the court in Leipzig, which rejected the cities' appeal and directed them to consider imposing bans as part of wider clean air plans.

The court also said cities won't be required to compensate drivers for being unable to use their diesel cars.

With Tuesday's ruling Germany's environmentalists say the pressure is on for politicians and manufacturers to take decisive steps to curb pollution.

Speaking with reporters after the ruling was handed down, Juergen Resch, executive director of the group Environmental Action Germany, one of the environmental groups that sued the cities, said the decision was "a great day for clean air in Germany."

also responding favorably to the ruling was the Nature and Biodiversity Conservation Union, one of Germany's oldest and largest environment associations.

"The auto industry has played badly," said NABU Federal Managing Director Leif Miller in a written statement.  "The view, apparently spread among the manufacturers, was that one could withdraw with the support of the federal government and half-hearted software updates from the affair. The judges have today given a clear rejection."

“Affected cities must now be made the trailblazers of a transportation U-turn as soon as possible to strike a balance between mobility needs and environmental and health protection,” Miller said.

The Diesel Technology Forum, a nonprofit that describes itself as being "dedicated to raising awareness about the importance of diesel engines, fuel and technology," took a different view.

"Today’s ruling by the Federal Administrative Court in Leipzig, Germany is a broad reflection on past policies and decision-making, rather than any firm judgment against the future for new diesel technology," the organization said in a statement.

"The ruling was not a blanket endorsement for widespread bans on diesel cars," the Forum said. "Rather, it allows Germany’s cities to decide the extent by which these and other measures should be used, if at all, to achieve cleaner air for their residents.

"A complex mixture of sources and influences contribute to air quality in all cities, whether European or American," the statement continued. "These can include traffic flows, congestion, utilization of mass transit, as well as the fuel and engine technology mix and performance of commercial and passenger vehicles, not to mention other sources like power generation and industrial activity.

"Achieving clean air progress as rapidly as possible in these cities is a goal that is shared by all. A key consideration should be how to accelerate adoption of newer generation of technology to achieving greenhouse gas reductions and cleaner air," the Forum said.

Speaking on behalf of automakers, Matthias Wissmann, president of the German Association of the Automotive Industry, told the Associated Press that the government could ease the uncertainty created by the ruling  by not leaving it to cities to decide on a case-by-case basis.

"We hope it comes to sensible national regulations," he said.