Tuesday, 04 December 2018
0
Robin Whitlock
HyperSolar has announced it has successfully identified and developed a method of minimising the loading of expensive platinum (Pt) catalyst on a large surface area 3D carbon foam structure, which will be incorporated into the generator for hydrogen production. 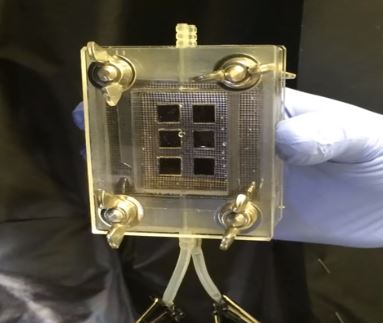 The company is engaged in developing technology to produce renewable hydrogen using sunlight and any source of water. Its research team, based at the University of Iowa, has published their results in Chemistry, a peer-reviewed scientific journal that details news and breakthroughs within scientific disciplines including electrochemical energy storage and conversion, electrochemical materials science, electrocatalyst and photoelectrochemistry etc. The published paper highlights the scientific team’s successful stable hydrogen production using the ultra-low Pt loaded 3D carbon foam that showed excellent mass activities superior to the state-of-the-art commercial platinum/carbon catalyst.

The research, led by Professor Syed Mubeen, utilises cheap carbon foam support with high surface area as base substrate to load ultra-low amounts of platinum (10 times lower than the state-of-the-art commercial electrodes) for efficient and stable production of hydrogen.

“This innovation, as reviewed by our peers within the scientific community, emphasises the importance of developing strategies to identify systems that could operate as efficient as current commercial catalysts while being cost effective and economical” said Dr. Syed Mubeen, principal investigator of HyperSolar’s research team. “As we continue to drive down the cost of individual components within our renewable hydrogen generation process, the entire system becomes capable of producing cheaper, more commercially viable hydrogen”.

Tim Young, CEO of HyperSolar, added that, with the company’s process and path to commercialisation defined, the company is focused on identifying each component of the device that HyperSolar believes will benefit from innovation. This further increases the efficiency and reduces the cost of the technology as a whole, bringing the hydrogen generator closer to commercial viability.