Thursday, 20 December 2018
0
REM
A Brussels-based start-up, Watt Matters, and partners including the EIB and Belfius, have inaugurated an innovative project based on an unprecedented form of financing for a jointly owned building. The joint owners of the 27-story Marius Renard 27 building in Anderlecht, Brussels, have benefited from a complete renovation of their roof without having to make any financial contributions, as Watt Matters fully financed the total project cost of €950, 000 ($1.2 million). 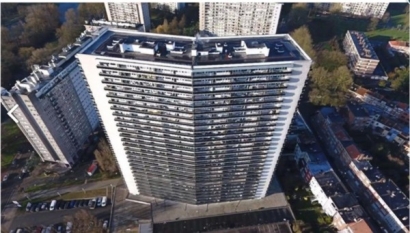 Watt Matters is covering the cost of the project via a form of third-party investment based on eco-citizen financing (the Energiris cooperative and crowdlending platform Ecco Nova) and a Belfius-EIB loan. The repayment of the investment made will be covered by selling the cogenerated green electricity back to the network. This production will also make it possible to cut the jointly owned building's energy costs by around €40,000 ($50,500) a year while also reducing CO2 emissions by 27 percent for heating and power in common areas.

On a technical level, this remarkable project is benefiting from innovations helping to recover every last unit of heat. A natural gas-powered cogeneration system is a generating set (electricity generation) in which heat that is normally lost is recovered and used to heat a building and produce hot water (heat production).

Watt Matters is an offshoot of citizen cooperative Energiris – whose members provided €195,000 ($246,305)  to finance the project – while other individuals contributed via the Ecco Nova platform. Also of note is the high participation rate (91.5 percent) among the Marius Renard 27 joint owners.

This project benefited from financing under the Belﬁus Energy Efficiency Package (BEEP), developed in Belgium by Belﬁus and the European Investment Bank (EIB) as part of the EU's Private Finance For Energy Efficiency (PF4EE) program. This initiative aims to stimulate and facilitate investment in energy efficiency and decentralized renewable energy generation. This package is not only for the great number of businesses wishing to invest in energy efficiency directly but can also be used to implement similar projects benefiting, among others, companies, public administrations, hospitals, schools and public and private sector non-profit organizations, by way of an energy sector company acting as a third-party investor, as is the case with Watt Matters.

Thanks to the terms of the EU funds, the exclusive EIB guarantee and the partial refund of energy audit fees (for businesses), Belfius plans to use this kind of financing to make a practical and targeted contribution to cutting CO2 emissions in Belgium. The EIB (the EU bank) has placed climate action among its strategic priorities and implements products tailored to provide the best support for innovative and efficient public and private sector projects in the fight for our planet.

In the “green electricity” decree of May 2011, the Brussels Government proposed changing how green certificates were granted to make cogeneration cost-effective within five years for jointly owned buildings in the city. The multiplier used helped compensate for low cost effectiveness caused by the resale of practically all electricity produced by cogeneration on an extremely low tariff. The Brussels Government proceeded to strengthen the green certificate market in December 2015, then increased the multiplier for cogeneration in jointly owned buildings with the ministerial decree of 14 June 2017. As the two other regions have not followed its example, Brussels remains a niche for developing this technology in jointly owned buildings thanks to the five-year return period.