Wednesday, 26 June 2013
0
REM
The International Renewable Energy Agency (IRENA) convened a major international strategy session on 22 and 23 June to discuss the prospects for a Clean Energy Corridor (CEC) to serve the rapidly growing power demand across East and Southern Africa. 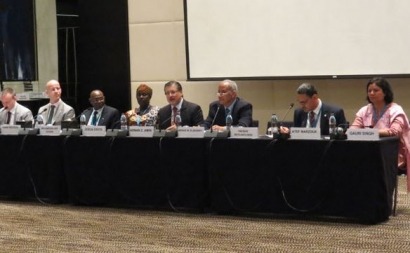 The Africa CEC brings together more than 20 countries in a coordinated effort to build the foundation for a substantial shift to renewable energy technologies for power generation.

More than 60 executives from regional commissions, planning bodies, ministries, electric utilities, development partners and multilateral financial institutions converged on Abu Dhabi, capital of the United Arab Emirates, for the two-day executive strategy workshop, to discuss how to bring a higher share of renewable energy to the people and businesses that are served by the East and Southern African power systems.

“IRENA has convened leading stakeholders from within the region and across the world to discuss the most effective strategies for bringing this ambitious Clean Energy Corridor into being,” he said.

Investment from Cape Town to Cairo in renewable resources and technologies could meet much of the energy need and create new opportunities for African companies.

“Lifting the African population out of energy poverty cannot be fulfilled if a business-as-usual approach is followed,” said Mosad Elmissiry, Head of the Energy Division at the New Partnership for Africa’s Development, an African Union implementing body. “We need a drastic transformation in our approach to developing renewable energy, to be sure renewables are fully utilised. The Clean Energy Corridor can support and further advance the implementation of the regional and continental initiatives already on the ground for further utilisation of renewable energy in Africa.”

The Africa CEC discussion also set the stage for the fifth session of the IRENA Council which was held in Abu Dhabi earlier this week.

As delegates discussed ways to ensure a sustainable energy future for the continent, IRENA released the first two of a five-part series of studies on regional planning for renewable power-generation in Africa.

Further reports are to follow from IRENA on renewable energy planning and prospects for East, North and Central Africa.

“This solution can provide the energy needed to meet growing energy demand and unleash the high economic growth potential that is predicted to take people across the continent out of poverty," he continued. "It would also promote the uptake of sustainable technologies to ensure the continent’s long term development, while also offering business opportunities for many local businesses in Africa.”