Friday, 06 May 2022
0
Robin Whitlock
Climate Action Network (CAN) Europe has published a new briefing, “Repower for the people” showing how the EU can wean itself off Russian fossil gas, without additional gas imports from elsewhere, by 2025. 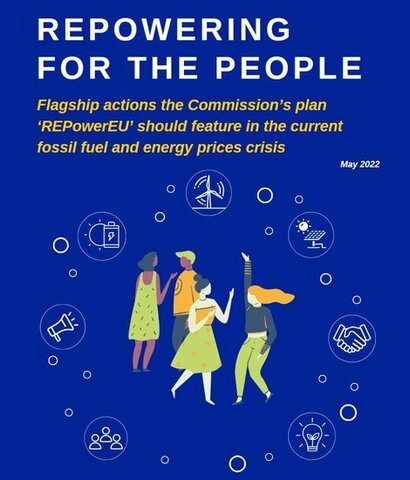 Courtesy of CAN Europe

This could be achieved by increasing the ambition to curb energy demand, ramping up sustainable renewables and rolling out flexibility options, while still achieving a complete fossil gas phase out in 2035.

Ahead of the European Commission’s publication of its new energy plan in a few weeks, CAN Europe presents three flagship initiatives which the ‘REPowerEU’ should feature to accelerate a secure and just energy transition. These flagship initiatives are guided by CAN Europe’s Paris Agreement Compatible (PAC) scenario and they should be implemented immediately through integrated funding support.

These are to achieve an annual growth of at least:

5 million building unit renovations in 2025 - The ‘REPowerEU’ plan published in March ignores the Commission’s own renovation wave and misses out on the energy efficiency first principle.

5 million new solar PV rooftops in 2025 - The Commission in March underestimated the market dynamics and is too shy. Boosting prosumers and renewable energy communities is key for cutting bills and ensuring citizens’ participation.

5 million new heat pumps in 2025 - The Commission’s plans to scale up heat pumps growth were already outdated before being published in March. Stars are aligned to reap the benefits of enhanced heat pump roll-out, complementing deep building renovations and solar rooftops to also make people actors in the energy transition.

These three flagship initiatives would put people at the centre of the ‘REPowerEU’ plan by reducing the energy demand of the buildings they are living in while promoting self-generation of solar electricity that powers the electric heat pumps to make heating homes clean and affordable.

“The EU doesn’t need to increase its fossil gas imports to ditch Russia’s by 2025” said Jörg Mühlenhoff CAN Europe’s Energy Transition Policy Expert. “Ambitious energy savings and an accelerated roll-out of renewables would not only bring us back on track to the Paris Agreement but also cut consumers’ bills.”

In addition to the current level of climate emergency, we are experiencing a paradigm shift on the scale of needed energy transition after Russia’s invasion of Ukraine. The timeframe for enhanced action has come closer and immediate actions now must give fruits very quickly to stop Russian gas dependence and achieve 1.5°C-aligned 2030 climate targets - meaning a roadmap to cut dependence on all fossil fuels. Legislative proposals under the ‘Fit for 55’ climate and energy package should be reflective of this reality.

“It is about time the EU acknowledges that the crisis we are going through is a fossil fuel crisis, fuelling Russia’s atrocities, exacerbating existing energy poverty and inequalities” added CAN Europe’s Energy Policy Expert Elif Gündüzyeli. “The Commission’s initial ‘REPowerEU’ communication published in March was missing a small detail: the people. Without the intention to empower the people, the plan risks being a band-aid - too weak to stop the bleeding only to cause more complications later.”

Furthermore, the EU must act wisely and shift all funding away from fossil fuels, towards supporting people and immediate measures to roll out flexibility options, energy savings and renewable energy transition. The Commission must avoid falling into false solutions like LNG, gas imports from other regions and speculative, new technological fixes which will create a lock-in with further dire consequences for the people in Europe and beyond.

“Repower for the people” briefing