Wednesday, 06 June 2018
0
REM
A new report from Community Sustainability USA, Southeast Cities’ Climate Action Moment, highlights the critical role that cities in the Southeast states of Virginia, North Carolina, South Carolina, Georgia, Alabama, Tennessee, and Florida have to play in ensuring that the United States contributes its share to reducing the risk of catastrophic climate change. 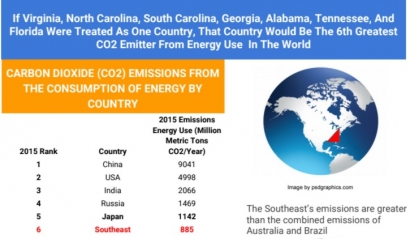 The number of cities in the Southeast with measurable climate goals is growing, and that trend is expected to continue. Over 20 percent of the cities analyzed in the report have set one or more measurable greenhouse gas (GHG) emission reduction goals or renewable energy goals, and an additional 6 percent of cities expect to set goals by 2021.

“Many Southeast cities are on the right path. Some that have not yet set goals are poised to make strong commitments, and others that already have goals in place plan to set more aggressive goals,” said Chris Ann Lunghino, Community Sustainability USA Executive Director.

“As first responders to the costly and expanding impacts of climate change that are being experienced in the Southeast, it makes sense that these cities are taking action, and we’re aiming to empower more Southeast cities to make commitments.”

The Southeast experienced three separate billion dollar weather and climate related disasters in 2017, including the Southern tornado outbreak and storms ($1.1B),  Hurricane Irma ($50B), and the Southeast freeze ($1B). The region also suffered significant damage from a series of extreme weather events March 6th – 28th  ($2.7B).

Cities across population sizes, income levels, and political leaning are setting climate goals and tracking progress. Over two-thirds of Southeast cities’ community GHG emission goals are set at 70 percent or greater reduction by 2050, and over 60 percent of goals for renewable energy are set at 100 percent. The report introduces the Southeast Climate Commitment Index, which ranks all 131 cities with populations above 50,000 in the seven states analyzed. The index measures the commitment of each of the 131 cities to renewable energy and to tracking and reducing GHG emissions.

Taking this approach, Virginia leads the Southeast both in the percent of cities that scored in the index’s top 20 and in the highest average index score per city. West Palm Beach, Florida, Atlanta, Georgia, Sarasota, Florida, Arlington County,Virginia, and Boynton Beach, Florida claimed the top five index scores.

Community Sustainability USA is a 501(c)(3) tax exempt charitable organization that works to create a culture that is committed to sustainability.