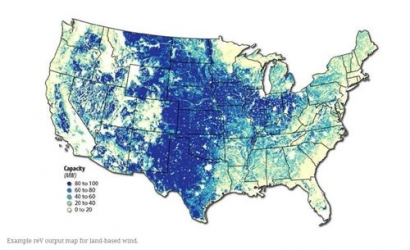 Available open source as of February 2020, the reV model was developed by researchers from the National Renewable Energy Laboratory to align previously disparate analyses for resource modeling, technical potential, and renewable energy cost supply curves. The reV model was developed for cross-platform use and can be scaled to run a small geographic extent on a laptop to all of North America on a high-performance computer or on the cloud.

The reV model integrates with several NREL tools and is the pipeline of data for large studies including the Los Angeles 100% Renewable Energy Study and the North American Renewable Integration Study.

The reV model can assess renewable energy potential for a single site up to an entire continent at temporal resolutions ranging from five minutes to hourly, spanning a single year or multiple decades. The model has been run across North America, South and Central Asia, the Middle East, South America, and South Africa to inform national- and international-scale analyses as well as regional infrastructure and deployment planning.

The land exclusion module in reV considers technical barriers, regulatory restrictions, or stakeholder constraints to land access for renewable energy projects so developers know where to focus their efforts.

Through efficient parallelization, the reV model reads hundreds of terabytes of time-series solar or wind data from state-of-art resource data sets, including the National Solar Radiation Database (NSRDB) and the Wind Integration National Dataset (WIND) Toolkit, which both recently became available on the cloud, expanding accessibility to the average user.

The reV model estimates for wind and solar sites the levelized cost of electricity, which represents the average revenue per unit of electricity generated needed to make up for the costs of building and operating a generating plant.

Based on LCOE and accessibility to transmission, the reV renewable energy supply curve module ranks sites based on which ones to develop first, again helping developers to know where to focus their efforts or eliminate potential sites.

Users can now access the full power of reV from their own computers through Amazon Web Services, a cloud computing platform. NREL has migrated several web applications to the AWS environment to expand access and scalability to the NSRDB and the WIND Toolkit. Through the AWS, users will be able to perform detailed analysis with massive data sets from their own desktop.