Wednesday, 27 November 2013
0
REM
The United Nations and the World Bank announced what they call "a concerted effort" by governments, international agencies, civil society and the private sector to scale up financing for sustainable energy. 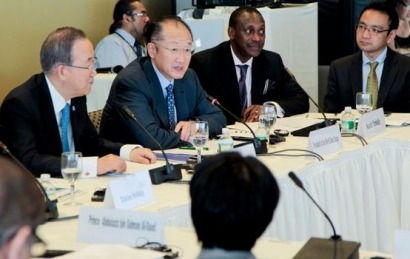 “Sustainable energy is the golden thread that connects economic growth, social equity, a stable climate and a healthy environment,” said UN Secretary-General Ban Ki-moon following a meeting of the advisory board of his Sustainable Energy For All initiative.

Launched two years ago, the initiative seeks to achieve three inter-linked goals by 2030:

Kim stressed that financing is key, with $600 billion to $800 billion a year needed from now until 2030 to reach the goals for access to energy, energy efficiency, and renewable energy.

“We are now starting in countries in which demand for action is most urgent,” he said. “In some of these countries, only one in 10 people has access to electricity. It is time for that to change.”

Ban praised achievements already attained such as Brazil’s ‘Light for All’ programme that has reached 15 million people, Norway’s commitment of 2 billion kroner ($330 million) in 2014 for global renewable energy and efficiency, and Bank of America’s Green Bond that has raised $500 million for three years as part of its 10-year $50 billion environmental business commitment.

“Now we need others to follow and build on these commitments. Achieving the goals of Sustainable Energy For All needs massive new and additional investment,” Ban said, stressing the initiative’s crucial roles in achieving overall sustainable development, reducing poverty and raising opportunity, combating climate change and “laying the foundations for the future we want.”

“The global thermostat is rising, threatening development goals and economies small and large,” he added. “It is clear that we need a transformation in how we produce, use and share energy.”