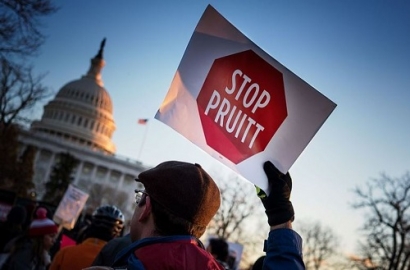 In his resignation letter, Pruitt said while he was honored to serve President Donald Trump, whom he praised with an almost religious zeal, “the unrelenting attacks on me personally, my family, are unprecedented and have taken a sizable toll on all of us.”

In a tweet posted Thursday afternoon, President Donald Trump said, “I have accepted the resignation of Scott Pruitt as the Administrator of the Environmental Protection Agency. Within the Agency Scott has done an outstanding job, and I will always be thankful to him for this.”

Pruitt's replacement, as of Monday, will be Andrew Wheeler, who was confirmed by the Senate as the EPA’s deputy administrator in April.

Prior to his confirmation he worked as a lobbyist for the coal giant Murray Energy. He is also a former chief of staff to Sen. James Inhofe, R-Okla, one of Capitol Hill’s most outspoken climate change deniers.

Of Wheeler, Trump said, “I have no doubt that Andy will continue on with our great and lasting EPA agenda. We have made tremendous progress and the future of the EPA is very bright!”

Pruitt was a lightning rod for climate scientists and environmentalists long before Trump tapped him to lead the EPA. As Oklahoma’s attorney general, he filed a number of lawsuits challenging Obama administration policies and the authority of the agency he’d eventually be chosen to lead.

Over the course of his 17 months in office, he rolled back or completely scrapped the cornerstones of the previous administration’s environmental and climate-change related policies including the Clean Power Plan and Clean Water Rule as well as eliminating rules and regulations for oil and natural gas companies.

Pruitt’s resignation came as he faced more than a dozen federal investigations by, among others, the EPA’s Office of Inspector General, the U.S. Office of Special Counsel and the House Oversight and Government Reform Committee.

Since the Senate confirmed him in February 2017, Pruitt has repeatedly found himself in trouble over his spending of taxpayer money for expensive office retrofits, travel and security, allegations that he used government resources for his own and his wife’s personal gain, and his close relationships with lobbyists and the chieftains of many of the industries he was tasked to regulate.

Among the revelations that ultimately doomed him were news stories detailing how he paid just $50 for each night he spent at the Capitol Hill condo owned by Vicki Hart, whose husband, J. Steven Hart, was chairman of lobbying firm Williams & Jensen, how he spent $43,000 for a soundproof booth for his office, and $3.5 million on a round-the-clock security force.

The Government Accountability Office later ruled that the soundproof booth expenditure was illegal, because the EPA did not notify Congress that it would exceed a $5,000 cap on furnishing officials’ offices.

He later got into hot water for giving big raises to two top aides after the White House refused to allow it.

Pruitt told lawmakers in April that he knew about the raises, but did not know his chief of staff would go around the White House to implement them.

The parade of scandals continued unabated throughout the spring, and included allegations that he used his EPA staff and security detail to run personal errands including finding jobs for his wife, buying him snacks, and tracking down a pricey skin lotion he wanted from a Ritz-Carlton hotel.

Throughout, the White House stood by its EPA chief, defending him as an effective advocate for the president’s policies, but earlier this week came the first indication that Trump was wavering in his support.

Speaking with reporters on Tuesday, Deputy White House Press Secretary Hogan Gidley said “the president feels as though Scott Pruitt has done a really good job with deregulating the government, to allow for a thriving economy, that’s important to him, but these things matter to the president as well, and he’s looking into those.”

Sen. Bernie Sanders, I-Vt., said in a statement, “Scott Pruitt was the worst EPA administrator in the history of the agency. Not only has he acted, time and time again, in an unethical manner, but he has led the agency in exactly the wrong direction.

“Instead of protecting our environment and combating climate change, he has worked to protect the interests of the fossil fuel industry and polluters all over the country. His resignation is a positive step forward for our country,” Sanders said.

On Twitter, Sen. Patty Murray, D-Wash., said “After so many ethical violations, it took far too long for Scott Pruitt to leave the EPA. Still, his ouster is welcome news for anyone who likes clean air, clean water and leaders more interested in public health rather than the bottom line of massive corporations and special interests.”