Monday, 08 April 2019
1
REM
A Denbighshire, Wales, renewable energy company has won a prestigious green energy award, presented at a major national awards ceremony, for the second year in a row. 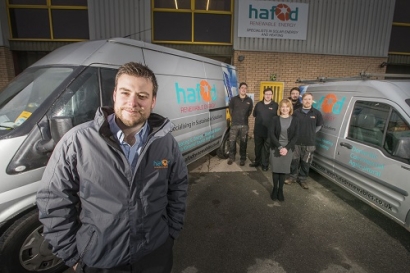 The accolade, which covers air and ground source heating systems, biomass and solar thermal schemes, was presented at a ceremony held at the Marriott Hotel in Cardiff where Hafod was also named among the top three solar installers in Wales.

David Jones, Managing Director of Hafod Renewables, said, “We’re delighted to have won this title again and to be the only company to be in the top three in this and the solar installer category.”

In the past 12 months Hafod, which was founded in 2010 by Jones and his father, has installed 113 RHI systems worth almost £1 million. The systems have saved an estimated 360 tons of carbon dioxide.

The business, which began in a small shop in Denbigh, now occupies an industrial unit on the town’s Colomendy Industrial Estate, employs nine staff and has become a key player in North Wales in renewable energy systems.

Jones said, “It has been a memorable last 12 months because we have seen a big change in the market so that although RHI schemes overtook solar as the major proportion of our work that trend has reversed again recently.

“That’s been driven by a rush to solar because the feed-in tariffs came to an end in April but I believe it will continue to be important because solar power can now hold its own against oil, gas and conventional electric competitors.

“The UK recently saw 30 percent of its power produced by renewable sources – who would have believed that was possible even five years ago.

“It’s very exciting to be part of what is a power revolution in this country and beyond – things are changing so fast now and that is only going to speed up as technology really gets to grips with the challenges.”