Friday, 18 February 2022
0
Robin Whitlock
Solvay and Veolia are launching the construction of the “Dombasle Énergie” industrial ecology project, which aims to replace coal with solid recovered fuels (SRF) for the production of clean and competitive energy at the historic Dombasle-sur-Murthe commune in the Meurthe-et-Moselle department in north-eastern France, close to the city of Nancy. 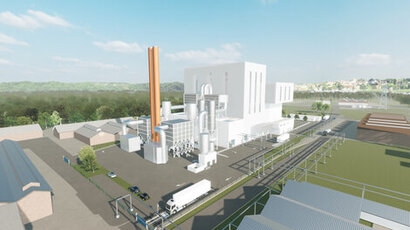 The project consists of replacing three coal-fired boilers with a boiler room equipped with two furnaces operating on the basis of refuse derived fuel (RDF) made up of waste that cannot be recycled. This will make it possible to halve the carbon footprint of industrial activity and to stop the annual import of 200,000 tons of coal. The Dombasle-sur-Meurthe site will thus have a cogeneration unit which will recover 350,000 tonnes of CSR per year, supplied by Veolia from 2024. The project will guarantee the factory's competitiveness and reduce its CO2 emissions by 50 percent.

The new facility will be built by Solvay and operated by Veolia and will have a capacity of 181 megawatts (MW) thermal and 17.5 MW electrical reused in the industrial process. This project will require an investment of 225 million euros with commissioning scheduled for 2024.

The Dombasle Energy project is a first in France and will create a virtuous circular economy loop via:

Reducing the site's environmental footprint (reduction of CO2 emissions by approximately 50% - i.e. a reduction of 240,000 tonnes of CO2 per year)

The creation of a new outlet for non-recyclable waste, which will be transformed into green energy;

The reduction of water withdrawals by 7 percent.

“ A pioneer in industrial ecology, Veolia is once again positioning itself as a major partner for manufacturers in their carbon emission reduction goals” said Antoine Frérot, Chairman and CEO of Veolia. “We are delighted to partner with a partner like Solvay for this project to contribute to the decarbonisation of industry in the dynamics of ecological transformation.”

Ilham Kadri, CEO of the Solvay group, added that the company’s sustainable development roadmap, Solvay One Planet, aims for carbon neutrality by 2050 and that to actively contribute to the emergence of a low-carbon society, the company must transform its factories to implement sustainable and alternative energy sources.

“This requires finding partnerships between private and public players” Mr Kadri said. “We are delighted to partner with Veolia on this project which will allow us to phase out coal in this second soda ash plant, after Rheinberg in Germany .”