Friday, 30 September 2022
0
REM
A Vale of Clwyd village hall has moved closer to achieving a net zero target – making it one of the most carbon neutral public buildings in Wales. 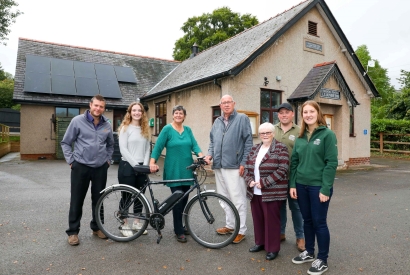 The First World War building in the village of Llanbedr DC has just had its latest renewable energy refit thanks to rural regeneration agency Cadwyn Clwyd’s Green Communities Project awarding the project £29,000 to spend on renewable energy.

The Clwydian Range and Dee Valley Area of Outstanding Natural Beauty (AONB) has put up £4,000 of that from their Sustainable Development Fund as match funding.

It puts them well ahead of the Government’s 2050 net zero target and the £1.3 million fund is still very much open for business, according to Green Communities Lead Haf Roberts who said, “This is probably one of the first carbon-neutral village halls in Wales.

“Here in Llanbedr they have looked at every aspect of their approach – there’s an outdoor gym, rainwater recycling system, air source heat pump and now an electric bike charger and an extended photo-voltaic system installed by way of the Green Communities fund, which seeks to promote environmental improvements and community well-being projects.

“The support from the Green Communities Fund has allowed them to add 15 new solar panels and a 9.5-kilowatt battery so that electricity generated during the day can be stored for use 24/7.

“A further £4,000 from the AONB’s Sustainable Development Fund has paid for motion-sensitive lights outside that are angled down so as to reduce light pollution and comply with the Dark Skies Policy and they have also helped with match-funding for the solar project.

“This is the first Green Communities project to be completed and it comes on top of previous work that has been done at the village hall here in Llanbedr where they have shown a real commitment to the environment.”

The new systems including the battery have been installed by Tremeirchion-based Hafod Renewables, experts in green energy systems and their Managing Director David Jones said, “This means Llanbedr has now got a modern and up-to-date system which has pretty much taken them off-grid.

“The systems they have here will last them 25 years - we’ll only need to come round for the annual service.

“It’s a fantastic community here, very forward thinking and always looking to safeguard the future of the building.”

Hall Manager Ron Bell made the application for the funding and he said, “It has been born out of a commitment to the environment and a desire to reduce costs while making the Village Hall as accessible as possible.

“We have had tremendous support from Cadwyn Clwyd and from the officers at the AONB and a great job done by Hafod Renewables.

“It means that we have futured-proofed the village hall and added extra amenities with the outdoor gym and the bike charging point which will hopefully attract more visitors to the area.

“The total cost has been £28,875 which has been met by the grants and now we have a very modern village hall which is busy throughout the week with activities ranging from model railways to birthday parties, yoga, Pilates, karate and table-tennis.”

The Green Communities project aims to deliver the wellbeing goals of the Welsh Government’s Wellbeing and Future Generations Act by focusing on Covid recovery and green growth at a community level.

It is a Welsh Government scheme under the ENRaW Fund (Enabling Natural Resources and Well-being) to support improvements to where people live, work and play.

It covers the rural areas of the four counties where biodiversity projects and green infrastructure can promote  environmental improvements and community well-being.

Communities with an idea for a project within the eligible counties can declare an interest by filling in the form available on the Cadwyn Clwyd website at http://cadwynclwyd.co.uk/green-communities/ .

Since 1995 Cadwyn Clwyd has attracted nearly £30 million in European and domestic funding for North East Wales’s rural areas across sectors such as the environment, food and drink, tourism and rural services to support communities at the grass root level.

For more information about Cadwyn Clwyd contact them on 01490 340500, email: [email protected] or go to http://cadwynclwyd.co.uk/

Photo Caption: The village of Llanbedr DC has got on its bike to turn its village hall into the greenest in Wales with a Green Communities Fund grant, pictured, from left, are David Jones, of Hafod Renewables; Cara Roberts and Haf Roberts of Cadwyn Clwyd; Hall Manager Ron Bell; local resident Gwenda Williams; and Morgan Jones and Gwenno Jones, of the Clwydian Range Area of Outstanding Natural Beauty. (Rick Matthews)