Tuesday, 05 June 2012
0
REM
Yingli Green Energy Holding Company Ltd. and US Soccer have announced a multi-year agreement that establishes the Chinese firm as the first official renewable energy partner of the organization and the US men’s, women’s, and youth national teams through 2014. 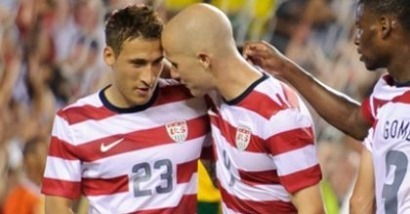 The partnership kicked off, with this week's US Men’s National Team match versus Mexico at Lincoln Financial Field in Philadelphia.

It also comes on the heels of the US Women’s National Team impressive run at the 2011 FIFA™ Women’s World Cup in Germany, capturing the attention of millions of fans stateside, a rarity for soccer in the US.

“Soccer is the world’s most popular game and we are extremely excited to be partnering with US Soccer, an organization that has achieved tremendous success and similar global recognition in recent years,” said Robert Petrina, Managing Director of Yingli Americas, a fully-owned subsidiary of Yingli Green Energy.

“We consider this association to be the best platform for building solar energy awareness across the country. We recently announced that we are on track to capture 15 percent of the North American solar market in 2011, and today we’re reinforcing our commitment to build a lasting brand and a recognizable local presence," Petrina said.

The notable growth of solar power throughout the US market in recent years charts a similar trajectory as the National Teams’ popularity.

Overall, average attendance at US Men's National Team matches has increased 60 percent since 2007 to 47,674 in 2011, with top solar energy states such as California, New Jersey, Massachusetts, and Pennsylvania playing host to key US National Team events during that time.

Nationwide, solar PV installations in the U.S. grew by 527 percent during that same period to reach 878 MW nationwide.

Yingli Green Energy has committed to working with US Soccer on a philanthropic initiative that aims to provide solar energy for local athletic centers in disadvantaged communities across the US. The program will be operational throughout the duration of the Yingli Green Energy and U.S. Soccer’s partnership, and is designed to be a lasting legacy for future generations to value environmental sustainability.

“We are looking forward to our new partnership with Yingli Green Energy through 2014,” said US Soccer President Sunil Gulati. “Working closely with a leading renewable energy company will give us the opportunity to enhance our social and environmental activities through a number of different initiatives over the next few years.”

Yingli Green Energy has made a significant global commitment to soccer in recent years, including official partnerships with the FIFA™ World Cup 2010 and 2014, and Germany’s largest and most successful soccer club, FC Bayern Munich. A key component of these partnerships centers on the ability to utilize the power of soccer to help advance the company’s commitment to social responsibility.