Tuesday, 05 November 2019
0
REM
BayWa r.e., together with its Dutch partner GroenLeven, has successfully built its third floating solar park in a record time of only six weeks. The Sekdoorn project in the Netherlands, near the city of Zwolle, has a total capacity of 14.5 MWp, enough to power almost 4,000 households. 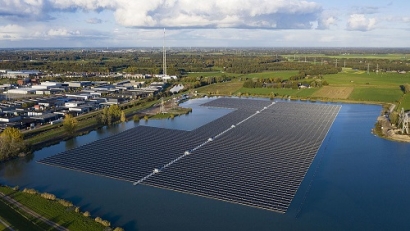 The installation of almost 40.000 solar panels was done in record time thanks to the use of the cutting-edge, self-designed system. After the completion of the 2 MWp Weperpolder project and the larger Tynaarlo plant with a capacity of 8.4 MWp, Sekdoorn is the third floating solar park BayWa r.e. and GroenLeven have completed in the Netherlands. BayWa r.e. is planning the construction of further floating PV projects in the country with a total output of around 100 MWp.

Dr. Benedikt Ortmann, Global Head of Solar Projects, stated, “In only a few months we built 25 MWp of floating PV projects in the Netherlands, which made us one of the biggest floating solar developers in Europe. We are planning to add more than 100 MWp of floating PV next year just in Europe.”

Floating solar parks provide a wide range of options for using economically exploited bodies of water – such as reservoirs, fish farming waters or lakes on former open-cast lignite mines – in two different ways. Ortmann went on to say, “As well as our pipeline in the Netherlands, we are already working on floating PV projects in Germany, France, Italy and Spain – the potential in Europe is indeed significant.”

In a current study, the Fraunhofer Institute for Solar Energy Research has quantified the potential for floating PV installations on decommissioned coal mining lakes at 15 GW in Germany alone. A study of the World Bank Group identified a potential for Europe of 20 GW if only 1 percent of the surface of man-made freshwater reservoirs is used.

There are already support schemes in place for such installations in the Netherlands as well as in France.

Ortmann continued, “We’ve proven that floating solar is technically manageable and comes with only slightly higher cost than ground-mounted systems. In order to optimize the Levelized Cost of Electricity (LCOE), the stability and long-life durability of the systems are absolutely key. That’s why we designed an entirely new floating plant concept together with our partners.”

The basis for these floating installations is the mounting system developed by BayWa r.e. in partnership with Zimmermann PV-Stahlbau GmbH.