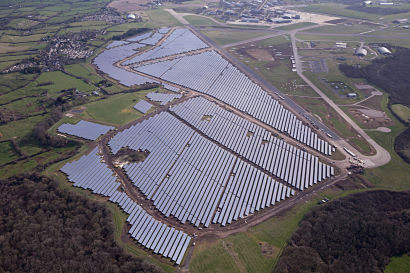 Bradenstoke solar power plant is the largest solar farm in England and the second largest in the UK. It is asset managed and operated by BSR and is owned by Siem Europe SARL. The plant consists of 269,000 panels, has a 69.8 MW peak capacity and a 50 MW AC export capacity and covers 213 acres of the former RAF base at Lyneham. On an annual basis, it generates approximately 65 GWh of clean solar energy and saves in excess of 21,000 tonnes of CO2 a year.

“PPAs provide stability in a volatile energy market and we are delighted that we have been able to work with Shell Energy Europe Ltd to complete this five-year agreement, which will enhance the value of the largest solar park in England” said Graham Harding, MD and CFO of BSR.

Jonathan McCloy, GM North West Europe for Shell Energy Europe Ltd, added that the UK is one of the company’s key markets for power and that Shell has been exploring ways to increase its power presence on both the buy and sell side. The deal with BSR will help the company to achieve this goal and is a significant boost to its renewable power portfolio in the UK.

Shell Energy Europe Ltd is present in 14 European power markets, which includes the offtake of renewable power from wind farms and solar parks in the UK and mainland Europe. It will supply the power generated from the Bradenstoke solar power plant to customers in the UK seeking to meet their needs with renewable energy.