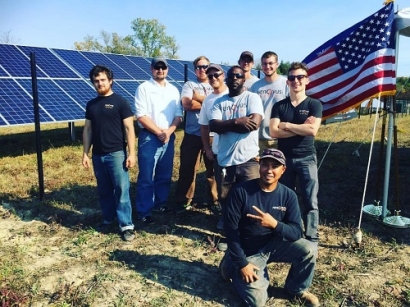 “Our green economy is creating the jobs of the future, and it is important that New York be at the forefront of the shift to a ‘green collar’ economy,” said Bronx Borough President Ruben Diaz Jr. “As we move away from fossil fuels, we must be prepared to replace traditional fuels with cleaner, renewable energy sources like solar. It is time for New York to take the lead and commit to solar energy. With smart planning and a true commitment at all levels of government, we can reach the goal of powering one million households with solar energy in the next five years.”

“I fervently hope that we have not reached a point where it is too late to turn global warming around. But unless the world community understands that a massive effort is needed to simply even slow it down, I fear for my children's and their grandchildren's future. We must focus wherever we can on pushing for safe, sustainable alternate forms of renewable energy. Solar power is, I believe, is one of the keys to that solution,” said State Senator Luis Sepulveda.

Currently, New York State has over 200,000 households powered by solar and 9,000 workers in the fast growing solar industry. Those behind the campaign say powering one million New York households with solar could generate jobs, reduce and stabilize utility bills, stimulate local investment, cut harmful air pollution, and accelerate an equitable transition to our clean energy future.

The coalition is calling on Governor Cuomo (D-NY) to institute and support concrete policies to reach the one million solar strong goal.

The Million Solar Strong Policy Roadmap outlines six key policy and market mechanisms it feels must be implemented or improved in order to achieve the goal: