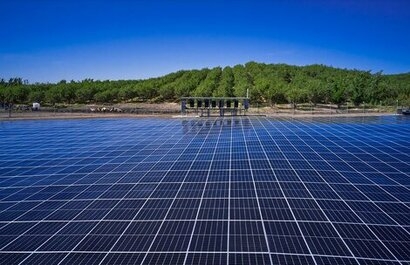 Although the exact size of the plant has not yet been disclosed, Erthos has revealed that the project exceeds 100 MWdc.

Industrial Sun, a renewable energy and storage developer based in Austin, TX, specializes in serving energy-intensive clients who either have or are planning to have an operational presence in Texas. To date and over the course of their careers, the Industrial Sun team members have collectively delivered more than 6,000 MWac of power projects throughout the United States, with a heavy concentration in the ERCOT market.

The project has an expected interconnect capacity of 100 MWac, all of which Industrial Sun is seeking to utilize. Facing an area with minimal lands suitable for development, they could not meet this target with conventional solar technologies, which typically require between five and six acres of land per MWac. In contrast, Earth Mount Solar PV typically requires fewer than 2.5 acres per MWac, achieving an energy density more than twice that of typical utility-scale systems.

“Erthos technology allows us to maximise our project capacity, particularly in those areas where our projects are land-constrained” said Wade Gungoll, Managing Director of Industrial Sun. “Erthos is a very welcome solution for our business, and for any developer needing to up-size the capacity of their projects.”

The agreement with Industrial Sun is the company’s largest contract to date and follows a recent announcement by Erthos of a signed memorandum of understanding for a separate 107 MWdc project, as well as 14 MWdc of additional signed contracts.

“There’s no question that our business is continuing to accelerate” said Charles Pimentel, Chief Commercial Officer of Erthos. “That’s in large part because of our ability to deliver improved energy density, higher wind ratings, and short build times – and to do so at a lower cost.”