Monday, 13 May 2013
0
Robin Whitlock
EU ProSun says it expects tariffs on Chinese imports to have a positive effect on solar jobs and growth after publication of PwC report 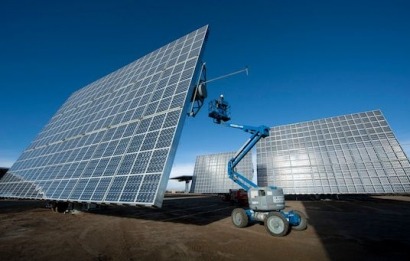 A new report by Pricewaterhouse Coopers (PwC) refutes the argument that duties imposed on Chinese imports will damage the solar sector. The report counters the Prognos study commissioned by AFASE which predicts job losses if duties are imposed. A press release by EU ProSun states the AFASE report makes a number of scientifically unsupported claims, such as the estimate of potential job losses exceeding the actual total number of direct and indirect solar jobs in some countries.

“The European solar industry is the global leader in technology and new innovations” said Milan Nitzschke, President of EU ProSun. “If the European Commission acts now against illegal dumping by Chinese solar manufacturers, this industry can survive and prosper. If the EU does not act, EU ProSun predicts a Chinese solar monopoly with disastrous consequences for European manufacturers, suppliers and customers.”

EU ProSun has fully endorsed the PwC report and expects jobs and growth to increase in the European solar sector, in line with the US experience, following the imposition of duties.

“The Prognos study contains major flaws in methodology and content, as well as contradictory evidence” said the author of the PwC study, Dr Wolfgang Nothhelfer. “The US imposed tariffs on photovoltaic products in 2012. As in Europe, a study commissioned on the possible effects of tariffs forecast an alarming crash of demand and job losses in the US. However, after the introduction of tariffs, demand increased and 14,000 new solar jobs were created. We should not believe alarming studies which are based on vague data and questionable assumptions.Indeed it is reasonable to conclude that the introduction of tariffs will have a net positive effect on employment in Europe.”

At present, according to EU ProSun, Chinese dumping of solar products is having a disastrous effect on European support schemes with the number of new installations falling heavily cutting 15,000 jobs in solar manufacturing as well as thousands of jobs in installation and supply. China has long been accused of imposing illegal state subsidies and dumping their solar products and US, and now European, markets.

However according to Andrea Maibaum from the Alliance for Affordable Solar Energy (AFASE) the PwC study is, itself, flawed.

“It is important to point out that Prognos has undertaken numerous research on the energy market for the German government and also for the German solar association (BSW) at a time where Solarworld was on the board of the BSW” she said. “The PwC study criticizes the Prognos study but fails to provide any evidence for EU ProSun´s argument that duties would promote EU solar jobs and growth. So far the Prognos study is the only solid economic research that analyses the impact of duties on EU jobs and value added.”

Ms Maibaum added that the results of the Prognos study are based on conservative calculations and that according to the European Photovoltaik Industry Association along the PV value chain about 32-60 jobs are created within the EU per each MW of additionally installed capacity.

“The calculated reduction of labor force ranges at the lower bound of these numbers” she said. “In Prognos´ calculations – whatever scenario or year observed – not more than 30 jobs will be lost per MW. If we take the positive effects on the supply side into account this number might even decrease to 23-25. The economic damage in terms of value added results in not more than about 42,000 € per job lost. The productivity lost along the PV value chain is therefore lower than the average productivity in the EU economy.

What is also important to know is that the job losses relate to the whole EU economy since the PV market is linked to other parts of the EU economy. In the solar industry employment is put a risk along the whole PV value chain. Not only direct jobs in the module, wafer or cell production will get lost. Also, the production of inverters and other BoS components will shrink. Additionally jobs in installations and maintenance, administration, logistics and services fall away.”

Ms Maibaum also pointed out that developments on the US market fail to provide a yardstick to forecast the impact of duties on the European solar market.

Ms Maibaum also stressed that the market structure in the US differs significantly from that in Europe:

Accordingly, a very important segment of the US market is not affected by the AD/CVD for Chinese products. In the EU, on the contrary, the demand for large ground-mounted installations is primarily served by crystalline solar products that are the subject of the ongoing investigations. Public support schemes, types of installations (e.g., private rooftop vs ground-mounted installations), cost of electricity, PV market operators and their relative importance all are very different between the EU and the US. Thus, developments on the US market cannot be a reference basis to assess the impact of duties.”

AFASE intends to look at the PwC report in greater detail, meanwhile the debate continues.