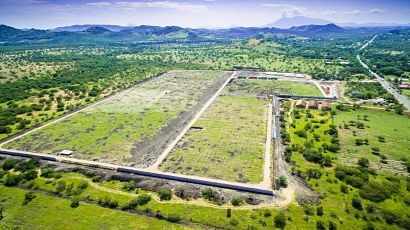 The power plants will have a total capacity of 100 MW and are being developed by Bosforo Ltda de CV, owned by two companies with long expertise in the energy sector: AES Soluciones, Ltda de C.V., part of AES El Salvador and a subsidiary of The AES Corporation, an international energy company, and CMI Solaris Investments, S.L., owned by a conglomerate Corporación Multi-Inversiones (CMI). The total funding for the project is approximately $160 million.

Upon completion, each power plant will generate sufficient electricity for nearly 30,000 rural homes and the project as a whole is expected to displace 175,000 tons of CO2 equivalent emissions annually by substituting 250 GWh of less efficient thermal generation by fossil fuels.

The solar power plants will be established in poor rural areas. An agreement has been reached in three municipalities in the eastern part of the country: Conchagua, El Carmen and Pasaquina, with the community projects being planned in close cooperation with residents. An estimated 70 jobs will be created throughout the initial two years of construction.

Finnfund has funded several companies in Central America over the years, but this the first investment by the company in El Salvador.

“Solar energy in El Salvador fits well with Finnfund’s strategy” said Jaakko Kangasniemi, CEO of Finnfund. “For us it is particularly important that the projects are taking place in poor areas which, in terms of development, have been left behind in many ways. We have paid special attention to cooperation with local communities”.

Abraham Bichara, CEO of AES El Salvador, added that support from multilateral development financiers such as Finnfund along with other senior lenders, OPIC, CABEI and FMO, has been a key factor in the successful development of Bósforo.

Image: Construction of the solar power plant in Pasaquina (Finnfund)