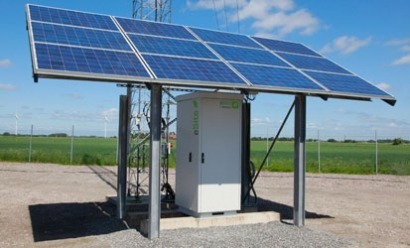 Flexenclosure is a designer and manufacturer of prefabricated data centre buildings and intelligent power management systems for the ICT industry. The eSite is a single-cabinet energy system developed for powering both on- and off-grid base stations. It is designed to support 100 percent network uptime, being a modular hybrid power system for off-grid and bad-grid cell sites.

Currently, operators and tower companies are struggling to guarantee network uptime with unreliable and expensive power for existing networks while choosing diesel as the main power source for base stations, or as backup for an unreliable grid, is becoming increasingly hard to justify. eSite Solar combines battery, solar and genset power sources and is designed to support 24/7 network uptime while cutting diesel costs by up to 90 percent.

IHS is the largest mobile telecommunications infrastructure provider in Africa, Europe and the Middle East and invests heavily in projects that improve energy efficiency to reduce the environmental impact of its operations and decrease diesel consumption across its portfolio. The Nigerian order is part of a significantly larger green energy programme being developed by the company and is the largest eSite deal in Flexenclosure’s history. It will enable IHS to pioneer the first large-scale deployment of solar powered towers in West Africa, accelerating a mobile-enabled economy across sub-Saharan Africa.

The deal will make Nigeria’s mobile network markedly more sustainable as the tower sites will be powered by new renewable energy solutions relying heavily on solar power. Flexenclosure will manufacture the eSite power systems in Sweden but over 100 eSites are already fully operational in Nigeria, a country which represents the biggest telecommunications market and the second largest tower market in Africa with a mobile penetration rate of over 80 percent and 151 million subscribers.

“We needed to be sure that we were deploying the best available power solution at our tower sites and we’re confident that we’ve made the right choice with Flexenclosure’s eSite” said IHS co-founder and Chief Operating Officer William Saad. “Flexenclosure has successfully rolled out various large scale deployments and eSite has proven credentials operating in the toughest environments while delivering exceptional reductions in diesel-related costs and carbon emissions.”

Flexenclosure CEO David King added that the deal is huge, not simply because of the number of eSites involved but also because it marks the next step in the company’s long-term strategy for the product. Nigeria has a population of nearly 180 million people with increasing smartphone penetration and limited fixed line infrastructure. The country’s vibrant wireless industry is therefore poised for a sustained period of network investment and growth.

Flexenclosure was founded in 1989. The company is based in Vara, Sweden, headquartered in Stockholm and has additional offices in Malaysia, Mexico, Myanmar, Nigeria and South Africa. Customers include ACS, Apollo Towers, IHS Towers, Millicom, MTN, Vodacom and Zain.