Tuesday, 24 August 2021
0
REM
The benefits of combining solar panel installations with green roofs has been confirmed by new research, which demonstrates significant improvements in energy production, stormwater filtration and most surprisingly, a major increase in animal biodiversity. 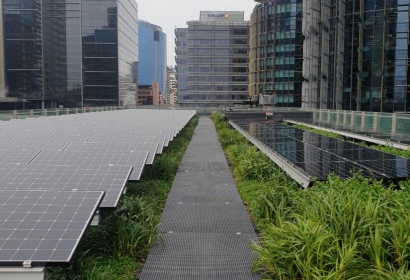 The study, led by UTS researchers Peter Irga, Fraser Torpy and Robert Fleck set out to measure the advantages of green roofs in cities, and was supported by Lendlease and Junglefy.

Undertaken in Barangaroo in central Sydney, the researchers compared the conventional photovoltaic solar system on International House with a combined PV solar and integrated Junglefy green roof system (biosolar roof) on Daramu House over an eight-month period that spanned summer and winter.

“We utilized a unique experimental design, where the presence of the green roof was the sole variable, with both study sites in the same geographic location and of the same height, size, and shape,” said Chief Investigator, Dr. Peter Irga.

Surface temperatures were up to 20 degrees lower on the green roof compared with the standard solar roof on hot days.

The research found that surface temperatures on the green roof were significantly lower, in some cases by up to 20°C during summer. This improved the solar energy output by 3.6 percent, equating to $2595 over the eight-month duration of the project.

“The efficiency of solar panels decreases when temperatures rise above 25°C, so by bringing down the surface temperature on typical hot Sydney summer days, the green roof enables the solar PV system to generate more electricity,” said Irga.

“The surface temperature reduction shows how green roofs could play an important part in combating the urban heat island effect, a major issue in our cities.”

While many of the results confirmed predicted benefits, the level of biodiversity observed on the city rooftop took the researchers by surprise.

“The most exciting discovery was of a deceased bird that appeared to have been attacked by a predatory bird such as a peregrine falcon, which suggests that the urban roof is supporting complex food web systems,” said Fleck.

Additionally, stormwater modelling on both roofs showed the biosolar roof could reduce flows into stormwater drains by more than 600 L per second compared to the conventional roof.

“This shows that green roofs are a powerful tool in reducing the impacts of flooding during storm events, particularly where climate instability is leading to longer, drier periods and more intense storm events,” said Irga.

Insulation was another benefit of the integrated system, preventing heat transferring inside the building as well as retaining heat in cooler periods.

Lucy Sharman, Sustainability Manager at Lendlease said integration of greenery into our urban environments is vital to create more liveable cities that can mitigate the impacts of our changing climate.

“This research has made a valuable contribution to our understanding of the multiple, measurable benefits of green roofs.

“We hope this extremely positive collaboration between industry, researchers and government inspires other organisations to look at the benefits of biosolar systems,” said Sharman.

Jock Gammon, the co-founder of Junglefy, the company that installed the green roof, agrees.

“The time is now to turn every rooftop green and create critical connections between people, places and plants,” he said.

UTS researchers are now working with Junglefy to identify ways plant-based systems can influence building ventilation and temperature control to reduce energy use.

The Green Roof & Solar Array – Comparative Research Project was made possible through the City of Sydney’s Innovation Grant program, which funds projects with the focus of making Sydney a greener, more sustainable city.