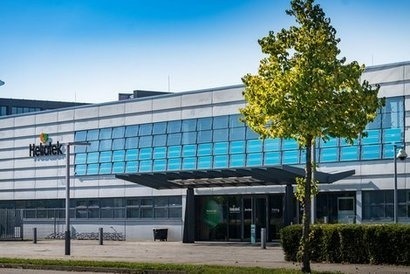 The financing round consists of 42 million euros of equity, 20 million euros of debt and about 18 million euros of subsidy. The Series D financing round is led by innogy SE, one of the leading European energy companies. New investors also include ENGIE, BNP Paribas and CEE Group, an investment company of Lampe Equity Management specialized in renewable energy. The existing investors, AQTON, BASF, eCAPITAL, High-Tech Gründerfonds, Innogy Venture Capital, TUDAG and Wellington Partners, participated in this round.

“We are very excited to have successfully completed this financing round” said Thibaud Le Séguillon, Heliatek CEO. “This allows us to strengthen our world leadership in organic solar film and to accelerate our expansion. We will continue to lead the way in enabling distributed energy generation on industrial and commercial buildings. We will follow our strategy by expanding the BIOPV – Building Integrated Organic Photovoltaic - market through supplying large quantities of our HeliaFilms to our customers in the building and construction material field.”

Peter Terium, CEO of innogy SE, added that the company has continually invested in Heliatek since 2009 and now has the opportunity to participate in creating the market for one of the most exciting innovations in the area of renewable energy.

According to EIB Vice President Ambroise Fayolle, who is responsible for EIB’s business in Germany, EIB is committed to support innovation in Europe and loans to innovative midcaps like Heliatek are key to driving Europe’s knowledge economy.

The company has also applied for the newly developed “KETs Pilot Lines project” technology and innovation funding scheme offered by the State of Saxony and financed by the European Regional Development Fund (ERDF). As a result, the company is expecting to receive grants up to 18 million euros over the duration of the project.

Heliatek plans to install its new manufacturing roll-to-roll facility on its site in Dresden over the next 18 months. It will offer a capacity of one million m² p.a. of solar films when fully ramped up. The company will continue in parallel its worldwide roll out of its HeliaFilm products to the building material and the automotive industry, creating more than 50 new high-tech jobs in Saxony.