Monday, 04 November 2019
0
REM
One of the North Wales coast’s ‘greenest’ caravan parks has just become  more eco-friendly after harnessing the area’s sunshine to help power its mobile homes – and save themselves money in the process. 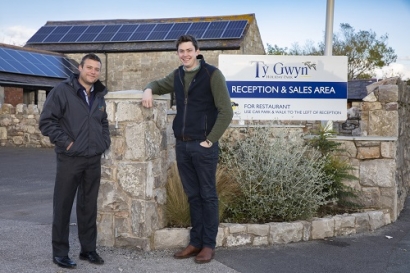 Energy experts Hafod Renewables have just installed an 86-panel solar array at the Ty Gwyn Holiday Park, at Towyn, Abergele, where the Owen family has been welcoming visitors since 1938.

The third generation of the family, brother and sister Rhodri and Angharad, have been stepping up their ‘green’ credentials with renewable electricity tariffs and recycling policies and the new £23,000 system will save them over £4,000 a year and pay for itself within six years.

Hafod Renewables Managing Director David Jones is at the UK’s largest holiday park show, the Holiday Park and Resort Innovation 2019, at the NEC in Birmingham this week to bang the drum for renewable energy in the tourism industry and to showcase the Ty Gwyn project.

Jones said, “We want to try and educate the holiday park sector that there are cleaner, more sustainable and cheaper ways to provide electricity for their sites.

“This makes sense for sites like Ty Gwyn because they’re busy from Easter through to Halloween which are the sunniest and warmest months of the year.

“Here at Ty Gwyn they also have a number of buildings with roofs suitable for solar panels and so the new system is spread over five different buildings and generates 34.4 kilowatts of electricity which is enough to run eight homes and easily tops up their mains supply.”

It’s a perfect solution for Rhodri Owens who had been faced with rising electricity costs, increasing demand and possible supply issues on the park which is just yards from the beach at Towyn.

He said, “We are very proud of our green credentials and are delighted to have been able to work with Hafod Renewables.

“As a high consumer of energy, part of our green drive is to move all our electric to cleaner energy sources and alongside the solar, we have also switched our mains electricity contract to a green tariff.”

Jones set up Hafod Renewables with his father, Richard, in Denbigh in 2011 and the award-winning £1.5 million turnover firm now operates from off-grid headquarters in Tremeirchion.

Jones explained, “There is no subsidy support provided any more for solar schemes but as the cost of solar panels have come down, their efficiency has risen so solar power is still very competitive and in the long-term it will be cheaper than fossil-fuel or even nuclear generated power.

“This system will pay for itself within six years but it has a 25-year lifespan so that adds up to almost 20 years of free electricity.”

Hafod Renewables installed its first system in July 2010 and since then they have fitted over 10,000 solar panels. Stacked end on end they would tower over 29,028-foot Mount Everest.

In the past 12 months they have provided solar systems for businesses like Henllan Bakery in Denbigh, dairy farms and even the world’s oldest heritage railway, the Talyllyn, where although Welsh steam coal is still king, solar is now playing its part.

They have also installed over 73 air-source systems and over 30 ground-source systems with a 16,000 hen egg producer and the North Wales Wildlife Trust among their customers.

Jones  concluded, “In just a few years almost everyone will be driving electric cars and by then most of our power will be produced by solar, wind, tidal and other renewables.

“Renewable energy isn’t a Cinderella-style operation any more. It’s a real contender and one with a better, cheaper long-term future than fossil-fuel or even nuclear generated power.”

Caption: David Jones with Ty Gwyn holiday park’s Rhodri Owen and some of their solar array on the roofs behind.