Friday, 26 February 2021
0
Robin Whitlock
Leading organisations working on climate, community energy, green buildings and green finance have published a joint statement setting out key priorities to Government on solar, which can deliver benefits for both the environment and net zero as well as helping the UK to a green economic recovery from Covid-19. 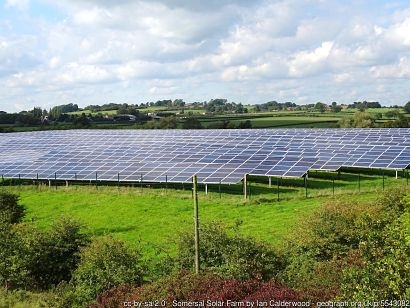 E3G, Greenpeace, Friends of the Earth, CPRE, the UK Green Building Council (GBC), WWF, Possible, Green Finance Institute and Community Energy England have signed a joint letter recommending the following priority policies to support the deployment of solar energy and storage in the UK, and deliver on the Government’s ambitions for net zero and a green recovery:

Set a minimum target for the deployment of solar energy in the UK. This should be in line with independent assessments of how much solar is needed to help the UK meet its net zero aims. Industry body, Solar Energy UK, says it is possible to deploy 40 GW of solar energy by 2030, which we endorse and suggest should be the minimum

Develop a solar sector skills, financing, and training deal to support this deployment, in line with government support for other renewable generation technologies, such as offshore wind. The sector deal should include detailed planning to develop the skilled supply chain which supports the solar and energy storage industry and can help provide a green economic recovery.

Recognise that solar is the most attractive technology that can operate at a community scale, and that its deployment is valuable both in illustrating and engaging people in the energy transition

Solar is one of the most affordable, efficient, and popular zero carbon electricity generation technologies available. More than 86 percent of people support its use, according to the Government’s Department for Business, Energy & Industrial Strategy (BEIS). Despite the impacts of Coronavirus and the national lockdowns, solar energy continued to make history in the UK throughout 2020. This included:

Contributing to a record coal-free period of power generation, of more than two months.

Meeting more than 11 percent of total UK electricity demand in May.

With around 14 GW of solar capacity installed at present in the UK, there remains major potential for additional capacity. The Committee on Climate change has suggested the deployment of 54 GW of solar energy by 2035 is necessary to help the UK meet its net zero carbon emissions goal, while the National Infrastructure Commission has suggested the UK will need roughly 38 GW by 2030. The UK solar industry is calling on the Government to commit to a deployment target of 40 GW by 2030, a figure that the signatories regard as a minimum.