Thursday, 17 January 2019
0
Dan McCue
In partnership with the World Future Energy Summit, Solar 2019 unveiled the winners of the 2019 MESIA Awards during a gala ceremony held at the Aloft Hotel in Abu Dhabi on January 16. 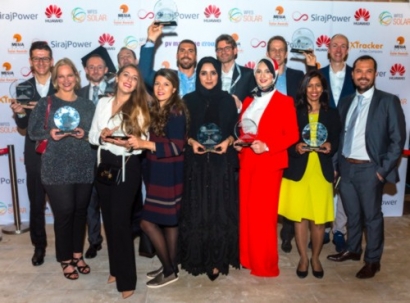 In total, there were 11 trophies in competition across several sectors.

MESIA’s Woman of the Year is Dr. Aaesha Alunaimi, a researcher at the R&D department of DEWA.  Dr. Aaeshahas been awarded for her amazing work and leadership in the research on PV performance and reliability. She dedicated her effort to finding new ways to mitigate failure and degradation of PV modules in desert climatic condition.

Entrepreneur of the Year went to Alexandre Allegue, Founder of Pawame. Alexandre, who also works with ACWA Power, founded and drove the growth of Pawame, a UAE-based Solar Pay-as-you-Go company, born and domiciled in the UAE. Pawame currently operates in Kenya, where in just two years they have changed the lives of more than 30,000 people and created over 300 jobs.

NEXTracker won the Utility Scale Solar Project of the Year award in recognition for their work on the Sakaka solar project in Al Jouf, Saudi Arabia. NEXTacker offers a combination of bankability, local content manufacturing capability, and has optimized tracker design for rapid installation of this first utility scale project in Saudi Arabia.

The award for the Roof-Top Solar Project of the Year went to MASSADER. Massader was selected by the Palestinian Ministry of Education and Higher Education to develop a national program and deploy solar PV systems on 500 rooftops of public schools and universities in Palestine with a total generation capacity of 35 MW.

The Regional Company of the Year award went to ACWA Power for its contribution in the renewable industry and impact on MENA. In 2018, ACWA Power developed and financed renewable energy projects and water desalination projects with capacities of 2.75GW and 75MIGD respectively, and raised 3,700 MUSD in financing.

The Financial Advisor of the Year award went to Apricum– The Cleantech Advisory. They successfully facilitated a strategic investment into Greencells, a key European EPC & solution provider of solar photovoltaic (PV) power plants, by OMAS, a wholly-owned subsidiary of The Zahid Group, a diversified Saudi Arabian conglomerate. The Zahid subsidiary OMAS gained a 50% stake in Greencells.

Legal Advisor of the Year accolade went to Pinsent  Masons, currently advising the successful EPC Contractor in the 950MW Concentrated Solar Power and Photovoltaic  project procured by DEWA and a number of CSP projects in Northern Africa. The 950MW project is the first CSP project in the region using a combination of CSP and PV technologies and is extremely significant for Dubai.

The Best Solar Innovation Award went to Desolenator for photovoltaic-thermal (PV-T) technology for desalination. This new technology is applied to enhance drinking water production from sea water and can run continuously 24/7 and off-the-grid.

The award for  the “most innovative technology on display” went to the Power Blox 200 by Staubli.

Last, but not least, the Solar Energy Picture of the Year went to Ghadir Shaar who took a wonderful aerial picture of 1MW of a ground mount solar project in Dubai's desert at the Emirates poultry. The picture was taken with a drone at sunset.