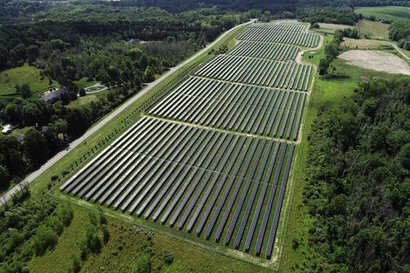 The project is one of the first in New York State to utilise bifacial solar modules and single axis tracking, which allows light to enter both sides of a panel, increasing total energy generation and also adjusting to track the movement of the sun.

The installation of the new solar array, located on the Water Authority’s property at the corner of Penfield Road and Watson Hulbert Road in Penfield, is part of the Water Authority’s long-term goal to reduce energy expenses. The array is expected to generate 8 million kilowatt hours of electricity per year, which represents more than 15 percent of MCWA’s energy needs for water pumping and treatment.

Through a competitive bid process led by NYPA, national solar energy developer Sol Systems in Washington D.C. was selected to install and operate the solar array at no expense to the Water Authority. In return, the kilowatt hours of energy produced by the panels are delivered to Rochester Gas & Electric and a percentage is credited to MCWA on its energy bills. The project also qualified for the New York State Energy Research and Development Authority (NYSERDA) solar energy incentive, which will pay nearly $1 million towards the project over the first two years of operation.

Justin E. Driscoll, NYPA’s interim president and CEO, added that the use of Water Authority land will make a new source of clean power available to the Water Authority and that Monroe County residents and New Yorkers as a whole will benefit from further reduction in greenhouse gas emissions, which supports the state’s ambitious clean energy goals.

“The New York Power Authority is pleased to have played an energy advisor role for the Water Authority to help make this unique solar project happen in Monroe County” said Mr Driscoll. “We commend the Water Authority’s dedication to this clean energy project, even amidst the challenges that we faced together during the pandemic and over the last few years.”

The array spans approximately 29 acres. For sustainability, during construction, the site was planted with a seed mixture of pollinator plants, which will create new habitats for local pollinators in a boost to the surrounding ecosystem.