Tuesday, 19 May 2020
0
Robin Whitlock
Households in the Cambridgeshire city of Peterborough have more solar panels installed than any other city in the UK, with Stirling in Scotland being the only other location where more than 1 in 10 homes have solar installations, according to an analysis of UK Government statistics by offsite eco developer Project Etopia.

These are the Top 20 Towns & Cities ranked by the proportion of households with solar panels: 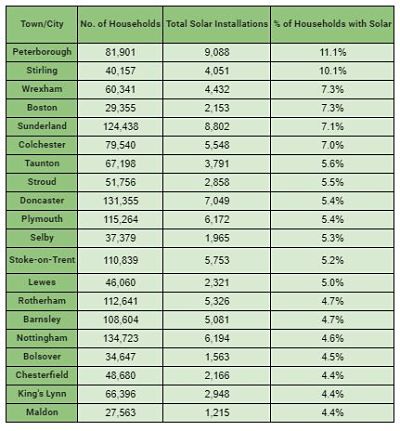 London is over-represented at the bottom of the table, with its best performing boroughs — Barking & Dagenham, Havering and Waltham Forest — managing only 1.4 percent coverage.

In fact, of the 20 local authorities with the lowest provision of solar panels, 19 of them are London boroughs.

These are the Bottom 20 Local Authorities ranked by the proportion of households with solar panels: 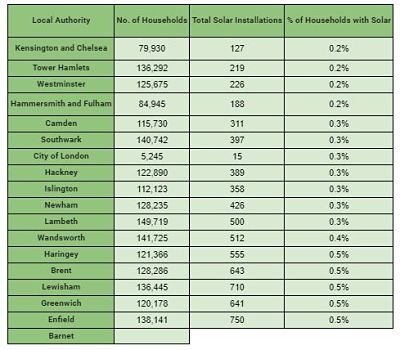 Project Etopia analysed the latest feed-in tariff statistics from the Department for Business, Energy and Industrial Strategy (BEIS) to find out which towns and cities have the highest proportions of green homes.

Solar is only one type of renewable energy that homeowners can turn to but it makes up the vast majority of eco installations on residential properties. The data was published for the final time recently because of changes to the feed-in tariff regime.

The UK passed a major energy milestone last year. In Q3 2019, the proportion of the UK’s electricity generated by renewables reached a record high of 38.9 percent, which surpassed gas for the first time.

Project Etopia champions renewable technologies, with every one of its homes having solar power and battery technology installed as standard together with other green innovations.

Etopia aims to build to an Energy+ standard, which means homes produce more energy than they need. Its Etopia Corby development in Northamptonshire was chosen as one of five Building for 2050 research projects funded by the Department for Business, Energy & Industrial Strategy.

“Britain has never been greener and these towns and cities are trailblazers who we should all look to for inspiration” said Joseph Daniels, CEO of offsite eco developer Project Etopia. “However, in the best performing town, Peterborough, more than 88 percent of households still lack solar, so there is plenty more to be done. Policymakers and suppliers need to examine why so many areas have particularly weak levels of solar installations while others sprint way ahead. The UK might not be the sunniest place on Earth, but the technology has improved enough over the past 20 years for it to be worthwhile anywhere in the country.”