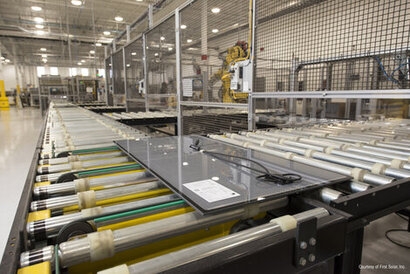 NGM produces approximately 3.5 million ounces of gold a year. Currently, the company is investing in building a solar power plant as part of a broader effort to decarbonise its operations and minimise its environmental footprint. As part of the deal, 260 megawatts (MW)DC of solar modules manufactured by First Solar in Ohio will be deployed to power the new 200 MWAC facility in the second quarter of 2023.

Barrick Gold Corporation has committed to a 30 percent greenhouse gas reduction by 2030, with the goal of net-zero operations by 2050. In support of this goal, NGM has set an intermediate goal of reducing its greenhouse gas emissions by 20 percent by 2025, compared to its 2018 baseline. This will partly be achieved by the solar power plant, alongside conversion of NGM’s coal fired power plant to natural gas.

“When we selected our solar module technology partner, we did so with very careful consideration” said Greg Walker, NGM executive managing director. “We made the choice to contract with a supplier who shares our values, including a commitment to fair labour practices and investment in American manufacturing and American jobs. By partnering with First Solar we also found an innovator that can deliver high performance solar panels with the lowest carbon footprint and the best environmental profile available today.”

First Solar designs and develops its advanced thin film solar PV modules at research and development centres in California and Ohio. Thus far, the company’s modules have set industry benchmarks for quality, durability, reliability, design, and environmental performance. The company also operates an advanced recycling programme that recovers more than 90 percent of cadmium telluride (CadTel) for use in new modules.

The company is currently investing $680 million in expanding American domestic PV solar manufacturing capacity by 3.3 GW annually, specifically through the construction of a third US manufacturing facility, in Lake Township, Ohio. The new facility is expected to be commissioned in the first half of 2023 and when fully operational will scale the company’s Northwest Ohio footprint to a total annual capacity of 6 GW, which is believed to make it the largest fully vertically integrated solar manufacturing complex outside of China. The facility will directly employ over 2,500 people in Ohio, while supporting an estimated 7,000 indirect jobs through its American supply chain.

In addition to its Ohio manufacturing facilities, First Solar also operates factories in Vietnam and Malaysia, and is building a new 3.3 GW factory in India that is expected to be commissioned in the second half of 2023. With First Solar’s expansion in the United States and India and optimisation of its existing fleet, the company anticipates that its nameplate manufacturing capacity will double to 16 GW by 2024.