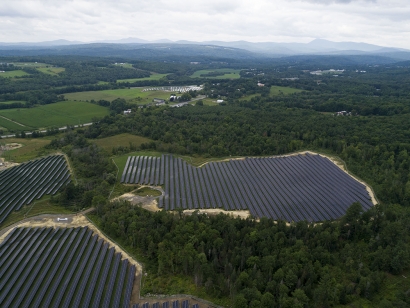 Over the past three years, the colleges have partnered with a subsidiary of NextEra Energy Resources, a leading clean energy company, to construct a utility-scale solar power facility that annually will create enough electricity to power about 17,000 New England homes.

Competitive Energy Services acted as an adviser on the project, which is the largest planned solar project in New England.

Each of the colleges is purchasing zero-carbon electricity from the Farmington facility to reduce carbon emissions from campus electricity use.

The Impact at Bowdoin College

As part of the Farmington solar project, Bowdoin will purchase five percent of all energy and the environmental benefits (renewable energy credits) generated by the 76.5 MW project—enough to power roughly 1,000 homes in the Northeast and equivalent to 40% of Bowdoin's current annual electric usage.

“We're proud to be part of a project that stands as an important example of how collective actions at institutions like ours can make a meaningful difference in reducing greenhouse gas emissions. It’s an especially exciting time for Bowdoin, as our involvement in this solar project is part of a larger effort to source 100 percent of Bowdoin’s electricity purchases from Maine-based renewable energy.”

While the Farmington project launched this effort in 2018, the same year Bowdoin achieved carbon neutrality two years ahead of schedule, the college has since signed agreements with numerous other Maine solar photovoltaic (PV) facilities scheduled to come online between 2021 and 2023, including a second large solar array on college-owned property at Brunswick Landing, the former Naval Air Station in Brunswick.

The first, developed in 2014 with Solar City, was at the time the state’s largest solar array and includes rooftop PV systems on Bowdoin's major athletic facilities.

By the end of 2023, all projects contracted by Bowdoin are expected to be online and producing power, covering 100 percent of current electric usage with Maine-based renewable energy.

These efforts are laying the foundation for the college's longer-term goal of electrifying the campus heating load and thus significantly reducing, if not eliminating, the use of fossil fuels on campus.