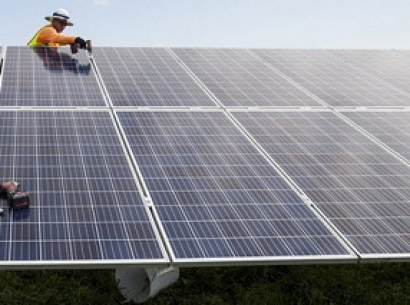 The state had been a national leader in policies aimed at replacing fossil fuels with renewable energy, but former Republican Governor Chris Christie changed course, ending several successful programs and attempting to bail out the state's struggling nuclear plants.

Now Murphy, a Democrat has vowed to renew the state's development of wind and solar power and push for stepped-up adoption of energy efficiency programs.

The companion bills sent to the governor's desk on Thursday were sponsored by Assemblyman John McKeon (A3723) and State Senator Bob Smith (S2v314).

Both aim to stabilize and expand New Jersey's solar sector by making solar power more affordable to the state's families and businesses.

Specifically the bills, which will be sent to the governor as a single piece of legislation, increase the state's "solar target" through 2021; close the current solar renewable energy credit trading program in an orderly way; reduce the overall cost of the current solar Renewable Portfolio Standard (RPS) by lowering the state's solar alternative compliance payment; and set in motion a process for considering the next generation of solar incentives in the Garden State.

The bill also increases the overall RPS to 50 percent by 2030, and will enable a community solar program, which McKeon and Smith say will ensure that all residents of New Jersey have access to solar energy.

The community solar program will give consideration to residential customers, especially in multifamily buildings, and low-to-moderate income customers, according to a statement from the Solar Energy Industries Association.

"The New Jersey legislature took a major step today toward protecting thousands of solar jobs that were at risk,” said Sean Gallagher, SEIA’s vice president of state affairs, after the bill's passage.

“This bill will enable many more New Jersey residents, businesses and communities to access solar energy. We urge Gov. Murphy to swiftly sign the bill into law and get the state on a path to meet its ambitious clean energy goals," Gallagher added.

Luis Torres, senior legislative representative for Earthjustice, a nonprofit environmental law organization, said he was encouraged by the passage of the legislation.

“All New Jersey residents, including low to moderate income customers, should be able to access the benefits of solar – including the job opportunities, energy savings, and credits.

"If done right, a strong community solar program can be a transformational tool to help expand solar access in an intentionally equitable way to communities that have long been underserved," Torres stated.

"Earthjustice looks forward to working with our coalition partners to ensure that the New Jersey Board of Public Utilities heeds the call of this legislation, once it is signed into law, to ensure that low to moderate income families are robustly served by community solar projects.”

Brandon Smithwood, policy director for the Coalition for Community Solar Access, a business-led trade organization, said Thursday's vote  was "an important milestone toward ensuring all residents of New Jersey can access the financial and environmental benefits of solar energy through the establishment of a community solar program."

“We urge Governor Murphy to sign this important legislation into law, and look forward to working with the New Jersey Board of Public Utilities to ensure it is properly implemented and becomes a win-win-win for all energy customers, the grid, and the environment,” Smithwood said.

Across the board, advocates for solar power said the overwhelming support of the New Jersey legislature will give the state's residents and businesses more of an ability to make clean energy choices, while spurring jobs and local business investment.

“We hope New Jersey will serve as a guidepost for other states to set ambitious clean energy policies and work toward a brighter future,” Kasotia said.

Anne Hoskins, chief policy officer of Sunrun, a San Francisco, California-based provider of residential solar power, said, in passing the legislation “New Jersey is paving the way for a future where citizens can create, store, and share solar power with their neighbors and make our energy system more affordable, clean, and reliable for the whole community.”